When there is an unprecedented craze among regional cinema actors to make a mark in Bollywood, Telugu Superstar Ravi Teja, has declined a film opposite Star of Millennium Amitabh Bachchan!

He says, “Yes, it’s true I have been offered a film opposite Amitji (Amitabh Bachchan) but I declined the offer because frankly speaking till date not a single South Indian star has been able to make his presence felt in Bollywood. So why should I make a fun of myself when I'm doing so well for myself in Andhra?" 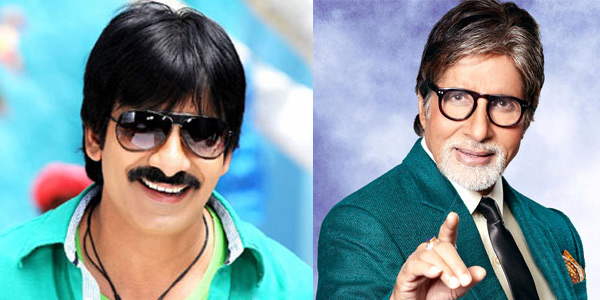 He informs, “It’s just not a film opposite Amitji that I have declined, I get several offers from Bollywood filmmaker but I purposely decline them as I am contented working in Telugu filmdom so much so that Bollywood never really fascinates me.”

“Further I have observed that unlike Telugu films that are completed quickly, Bollywood films, take lot of time to wrap up. Hence for a busy actor like me hanging up in a Bollywood project will be troublesome for me,” he argues.

“However I'm open to doing multi-starrers in Hindi. I don't mind sharing screen space with some top star in Bollywood,” he quips.

It may be noted that Ravi Teja, who is on cloud nine thanks to the stupendous success of his latest film KICK 2 recently rubbed shoulders with Bollywood mega star Salman Khan, who played the lead in the Hindi remake of Ravi Teja’s KICK.

Salman Khan’s most popular TV reality show BIGG BOSS is renowned for featuring personalities stained with controversies and notorious elements. Thus it’s no wonder that this year’s most controversial figure, the self styled ‘God-woman’ Radhe Maa might feature in the BIGG BOSS season 9.

According to a leading website the producers of BIGG BOSS 9 have approached the God-woman and are hopeful she might be one of the most sensational contestants of the show.

A source close to the TV Show on condition of anonymity has revealed, “Yes, it is true. We are trying from our side to include Radhe Maa for the show.” “In fact, the truth is, we have already approached her and the meeting has been fruitful. If everything goes fine she will be a part of the show," he added. 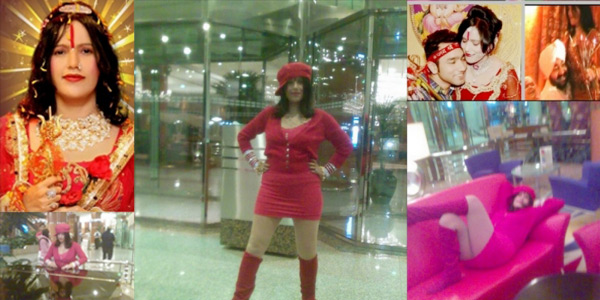 Though nothing is concrete and there is no confirmation from the sources of Radhe Maa but the news of the controversial God-woman participating on the TV show has send ripples in the media.

Truly if Radhe Maa makes her presence on the show then the TRP of the show will surely skyrocket beyond limits looking at Radhe Maa unprecedented popularity that she has acquired thanks to her seductive red mini dress pictures that went viral on social media sites a few weeks ago and the charges of dowry and harassment cases against her by a helpless Mumbai woman.

With Radhe Maa notorious for seeking publicity at the drop of a hat, one wonders will the self styled ‘God-woman’ grab this golden opportunity? What say???

Posted by Unknown at 1:52 AM No comments:

Badshah Khan aka Shah Rukh Khan loves to live life king-size. His imperial six-storey sea facing bungalow ‘Mannat’ in Mumbai, is an incredible abode, speaking volumes about his passion for his aristocratic living.

To add feather in his majestic lifestyle Shah Khan has recently bought a vanity van at a staggering cost of Rs 4 crore thus becoming the only actor to have the most ‘Expensive’ vanity van in B-Town with amazing technological features that leaves one wonder stuck!

Admeasuring 14 meters long and occupying an overall space of 280 sq.feet; the vanity van is so gigantic that it cannot be accommodated in SRK’s bungalow and has been parked outside Mannat! 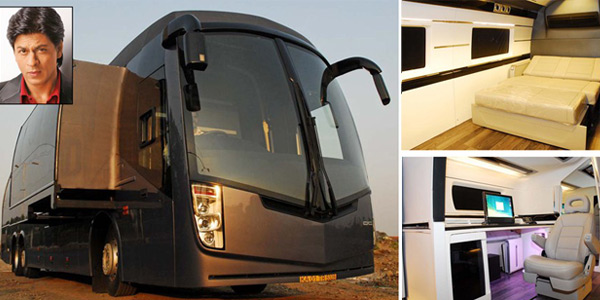 Speaking about the technological marvel of Shah Rukh’s vanity van, Mr. Chhabria said, “What makes the vanity van exclusive is that we have designed 4 rooms – consisting of a wardrobe section, special make-up chair, separate toilet cubicle and an in built shower. Then there is a kitchenette with provisions for tea and coffee, and is also equipped with a microwave.”

“To provide a good amount of comfort we have added a provision to expand one room, which in turn, would increase the space by 80 sq.ft. Thus providing a net 360 sq.ft. area inside the vehicle,” he informed. 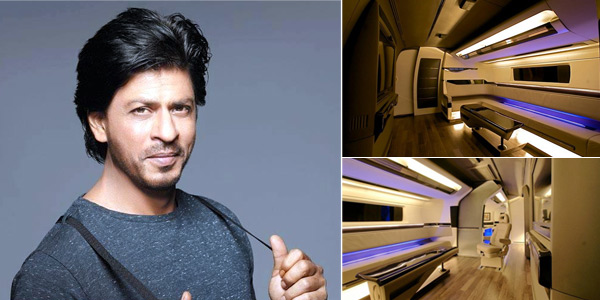 Besides being decently spacious the van boost of mind-blowing gadgets that makes one dumbfounded. According to Mr. Chhabria the van has Wi-Fi and Apple TV in all the rooms, three 4K television sets with satellite TV, and a top-notch sound system with a total output of sound that stands at 4000 Watts.

The entire vanity van has feather touch-control system from lighting system, as well as heating and cooling. Many functions inside are I-Pad controlled including curtains and illuminations.

In nut shell SRK’s vanity van is perfect combination of flamboyance, elegance and sci-fi. Mr. Chhabria says, “We have fitted the van with all the latest gadgets and technological items which make it the ‘Only’ vanity van in India to have all these things.”

Posted by Unknown at 1:40 AM No comments: