AN ODE TO REMEMBER – PART 1

Isn't it amazing that some families have totally dedicated themselves in the film industry? Today we are going to see about one such family where all the men have contributed immensely to the film industry. Well ofcourse let us start with the father and then move on to the sons! 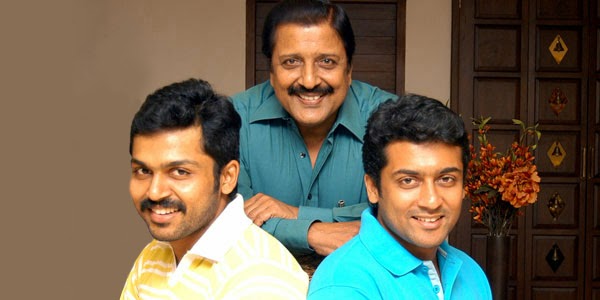 The father is Sivakumar. Ofcourse you now no we are also going to talk about Surya and Karthi. But first here's more about Sivakumar. The man entered the film industry with Kaakum karangal in the year 1965. After this there was no looking back as he turned out to be one of the most sought after hero.Hits kept flowing his way and even in early 2000's he was roped in to assume the role of a father etc. Known for his powerful expressions, Sivakumar's landmark movie would ofcourse be 'Sindubairavi'. 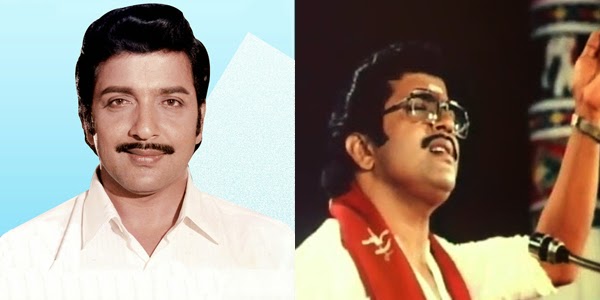 Moving ahead to the sons, there is a tough competition ofcourse between the 'Singam' and the 'Sirutthai'. Surya ofcourse does a brilliant job in whichever role he is casted in and has a huge fan following. His entry movie although was Nerukku Ner. But what brought him to highlight was the movie Kaakha Kaakha directed by Gautham Menon. Ofcourse we all know how he met his lady love too.Thus adding another member in the fraternity belonging to the film industry. 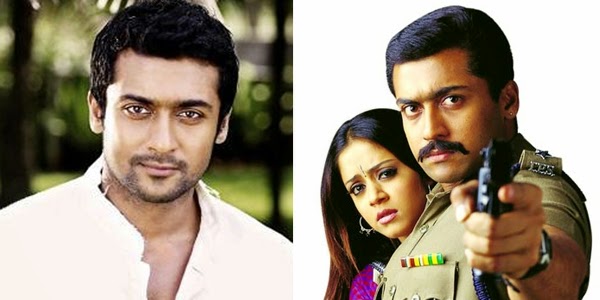 The youngest of the one Karthi ofcourse. A wonderful breakthrough for him was 'Parutheeveeran' ofcourse. Movies like 'NaanMahaan Alla' gave him a good break too. His last one was the movie Biriyani that released last year. He is currently filming for 'Kaali' that is due for release late this year. 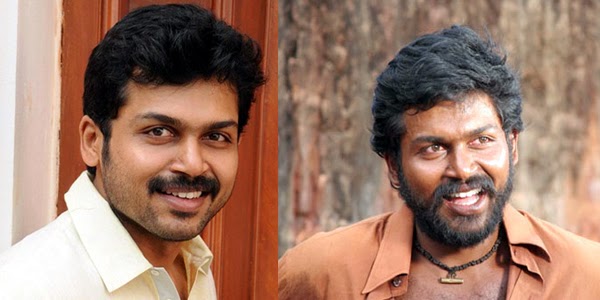 What is amazing to note about this family is that the father and the son share a wonderful rapport in the film industry.There is no ego clash between them although both the brothers are competing in the current world of movies. Isn't that something brilliant to admire? Also bringing in the family to the film media is something many families don't do. Raaga.com thinks this is amazing and honours this family for their contribution in the film industry.
Posted by Unknown at 6:02 PM No comments:

If I had selected Amitabh Bachchan for RJ, Indian cinema would have lost jewel of an actor! - Ameen Sayani

Just as Amitabh Bachchan is the star of millennium likewise Ameen Sayani is the undisputed monarch of Radio. Winner of Indian government’s highest civilian award Padma Shri, Ameen Sayani is recognized for his evergreen radio program BINACA GEET MALA that captured Bollywood hit parade on Radio Ceylon (Sri Lanka old name). The program was such a hit that it was even broadcast from AIR’s Vividh Bharati for almost 46 years. 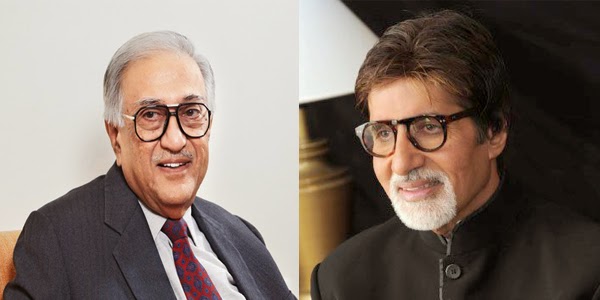 At 81, Sayani is back on Radio thanks to the popularity of Golden Era. He will be presenting a program ‘SITARON KI JAWANIYAAN’ every Sunday evening on Radio City.

Recalling an interesting anecdote Ameen Sayani at the promotion of his forthcoming radio show ‘SITARON KI JAWANIYAAN’ said, “During the late 60’s I was the busiest Radio announcer. I was engaged at radio station around the globe that included India, Sri Lanka, the US, Canada, Britain, UAE and New Zealand. During the same period eminent actor Amitabh Bachchan visited A.I.R. to try his luck as an announcer but each time he would come I would be busy and my receptionist would ward him off saying come after taking appointment.” 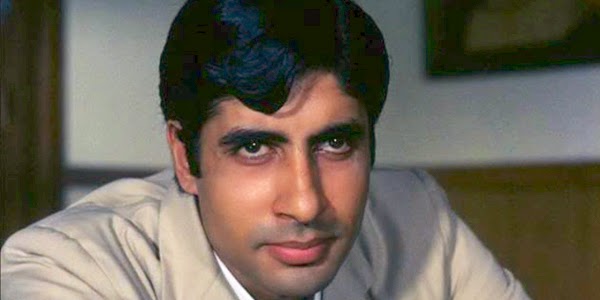 He added, “Thus I could never take Amitabh Bachchan’s voice audition test. Disappointed Amitabh gave hope and tried his luck in Bollywood.” He continues, “Few year later when I saw ANAND (1971) I was quite impressed by Bachchan’s baritone and felt he was an ideal announcer for Radio.”

He informs, “Afterwards I got the opportunity to interview Amitabh Bachchan and I praised him for being a monarch of such a good voice. It was then that Bachchan informed me that he had visited me thrice at A.I.R. for voice modulation test but I could never entertain him and we had a great laugh.”

Ameen Sayani however confesses, “Though I lament rejecting Bachchan for A.I.R. but on second thought I feel if I had selected Amitabh Bachchan for Radio announcer’s job, Indian cinema would have lost a precious jewel of an actor!
Posted by Unknown at 3:40 PM No comments:

Mika Singh’s success story cannot be complete without the mention of his controversial kiss that he indulged with item girl Rakhi Sawant at his birthday bash in 2006.

Though the kiss created a ruckus at the party and even dragged Mika Singh to the court but it proved a blessing in disguise as opened doors of stardom. The ugly episode became a hot cake for the electronic media and was splashed on each and every news channel thus popularizing both Mika Singh and Rakhi Sawant, who till then were struggling artists.

Speaking about the infamous kiss Mika in an interview clarified, “I had thrown a party to celebrate my birthday at Someplace Else Pub in Andheri (Mumbai) and had only invited selected few friend including famous music video director, Ashish Sherwood, (Rakhi Sawant’s boyfriend). I had strictly avoided Rakhi because of her obnoxious temperament. However to my dismay she arrived with Ashish and began to be over friendly with me. I did not bother and was enjoying the party.”

He added, “Everything was fine and even Rakhi Sawant was enjoying the party. However things turned dramatic when Rakhi tried to apply cake on my face. I had instructed everybody not to apply cake on my face as I suffer from skin allergy. But Rakhi went ahead despite my warnings, hence I lost temper and in order to teach her lesson I kissed her in public!”

Humiliated at being kissed Rakhi Sawant created a lot of drama. She and her friends began a brawl in which her boyfriend Ashish tried to smash Mika’s bodyguard head with a beer bottle but was instead beaten. Rakhi left the scene but continued grabbing media attention by alleging molestation charges against Mika Singh in Mumbai court. 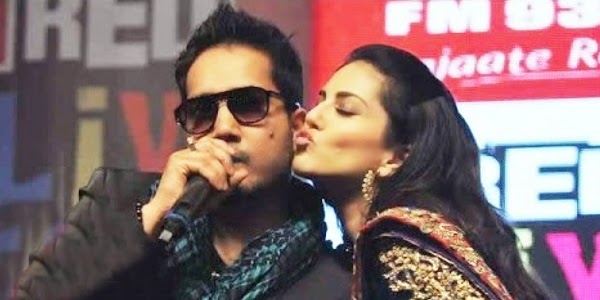 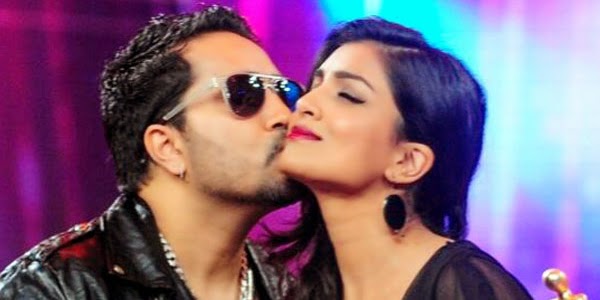 Further he was once detained at Mumbai International airport violating the FEMA (Foreign Exchange Management Act) rules for carrying excess currency. In another instance he was framed by the Gurgaon district administration for abusing wildlife norms at his farmhouse ‘King’s Jungle’ located in Gurgaon. 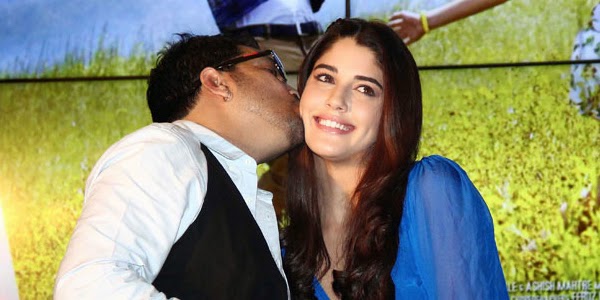 Controversy and Mika Singh thus became synonymous and the media termed him as ‘Controversy Boy’. Reacting to the controversies Mika Singh boldly admits, “I love the image of a ‘Controversy Boy’ because I am the only bad boy in the film industry who is good at heart and that is reason I have such a huge fan following.”
Posted by Unknown at 11:12 AM No comments: