Ashutosh Gowariker Relies Back On A R Rahman

Music has always been a backbone of Indian cinema and if you have a music composer of the class of A R Rahman then virtually half the battle is won. It seems eminent filmmaker Ashutosh Gowariker, who made critically acclaimed and successful movies with A R Rahman like LAGAAN, SWADES and JODHAA AKBAR has understood this hard realty after the failure of his last two movies WHAT'S YOUR RAASHEE and KHELEIN HUM JEE JAAN SE that’s reason he has reverted back to the genius music composer for his most ambitious forthcoming movie MOHENJO-DARO. 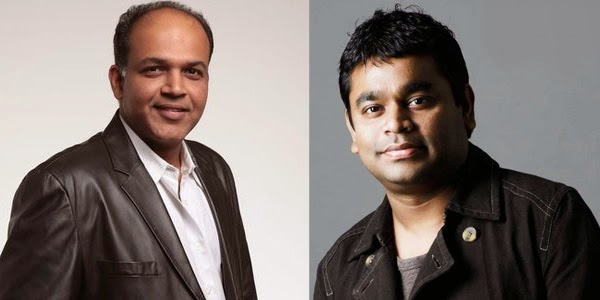 Readers may be aware that after the outstanding success of LAGAAN, SWADES and JODHAA AKBAR, Ashutosh Gowariker got carried away in the flood of recognitions that came his way and like probably felt he is a star director and has the capabilities to produce hits with any music director. Hence he gave music director Sohail Sen a break in his movies WHAT'S YOUR RAASHEE and KHELEIN HUM JEE JAAN SE but unfortunately both prove disastrous at the box office compelling Ashutosh Gowariker to rely back on the master composer A R Rahman.

Though a close source from Ashutosh Gowariker insists, “Ashutosh Gowariker has always regarded Rahman sahab as the ultimate composer but was forced to satisfy with new comer music director Sohail Sen after Rahman was busy with Danny Boyle's SLUMDOG MILLIONAIRE.” The source continued, “This time also Rahman sir is tied with many important movies both in Bollywood and in South Indian cinema yet he met Ashutosh Gowariker and has given his nod for his movie MOHENJO-DARO.”

After the debacle of his past two films Ashutosh Gowariker is leaving no stone unturned to make a marvel of a movie. Hence to make a comeback with a vengeance he has not only cajoled Rahman sir to compose the music but he has imported celebrated German cinematographer Karl Walter Lindenlaub, who has to his credits Hollywood hits like INDEPENDENCE DAY, STARGATE, THE CHRONICLES OF NARNIA: PRINCE CASPIAN, THE JACKAL AND THE HAUNTING etc.

Besides Ashutosh has also signed Hollywood stunt coordinator, Glenn Boswell, who has the reputation of giving Hollywood hits like TITANIC, THE MATRIX, GHOST RIDER etc.
Posted by Unknown at 4:32 PM No comments:

AN ODE TO REMEMBER - Part 5

Our Ilayathalapathy Vijay and his father have contributed immensely to the film industry. S.A.Chandrasekhar was infact the reason Vijay is in films today. It was him who casted Vijay in the movie for which he was the Producer himself. 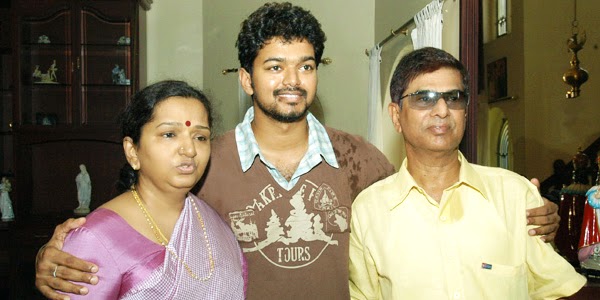 S.A.Chandrasekhar has contributed a lot as a writer, an actor and even as a producer. His contribution for the movie 'Sattam oru iruttuarai' is very well known which infact was done in his early career days.Like father, Like son would be an apt way to describe S.A.Chandrasekhar and Vijay considering Vijay is also a multi -talented personality. Vijay is a wonderful dancer, a singer and a good actor who can also bring out comedy so well. Due to his humble nature he is preferred by many a Directors. 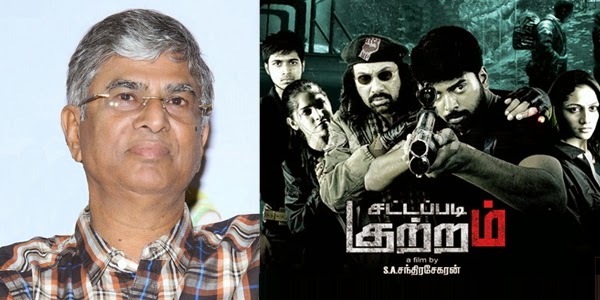 S.A.Chandrasekhar even until a few years back has been actively involved in the film industry.'Sattapadi Kuttram' was his last stint. Vijay too has been on a peak for quite some time now. He gave a wonderful hit early this year. 'Jilla versus Veeram did a lot of rounds and ofcourse it was Jilla that received a better recognition. 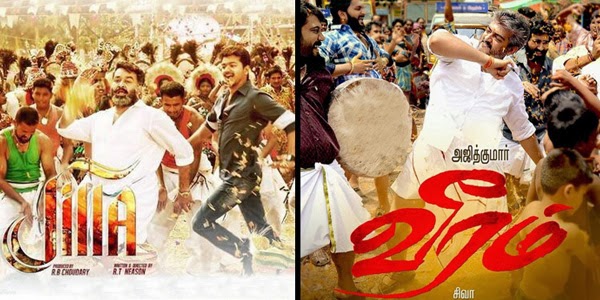 Both father and son have always contributed at maaking better films with a strong subject line.It is not just the father and the son this creative in the family, the mother has given her share of contribution in the singing field. She is a wonderful singer who contributes excessively in the way music has been projected. 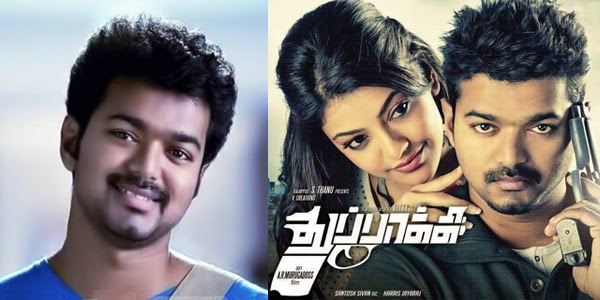 In terms of Vijay's career it was Thupaaki that released a coupl of years back that brought back his charm. Thalaiva also showed Vijay ina whole new level and a different his phase of his.S.A.Chandrasekhar and Vijay's interest in politics and social service is yet again one more striking quality that is similar between both the father and the son.

Raaga.com salutes the wonderful contributions made by both the father and the son in the Tamil Film industry.
Posted by Unknown at 3:27 PM No comments:

Sajid Khan’s latest laugh riot HUMSHAKALS is being looked upon by film buffs as the movie is marketed on its novel concept of its lead three actors Saif Ali Khan, Ram Kapoor and Riteish Deshmukh playing triple role. However Raaga.Com wishes to enlighten the younger generation that this not the first film that has an actor playing triple role. Earlier too, competent actors, have played triple role but the novelty of HUMSHAKALS is that it has three protagonist portraying three roles in the same movie, a concept never seen on Indian screen. 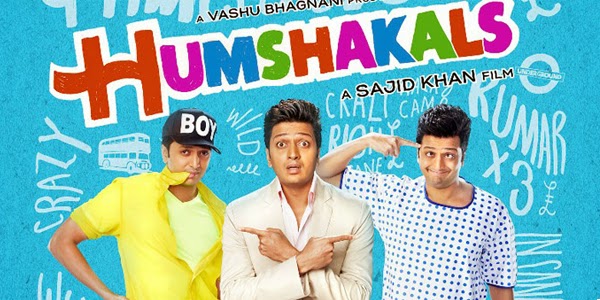 Speaking about the first Bollywood actor who stunned the viewers with triple role was ace comedian Mehmood in HUMJOLI, a remake of Tamil film PANAKKARA KUDUMBAM. The movie was directed by T. R. Ramanna, who directed the original with the legendary actor M.G.R. in the lead. In HUMJOLI, Mehmood played the triple role imitating the Kapoor clan by portraying Prithiviraj Kapoor, Raj Kapoor and Randhir Kapoor. 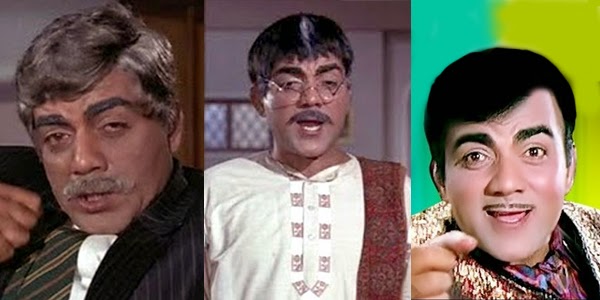 After Mehmood won wide acclaim for his memorable performance eminent comedian I.S. Johar hit the jackpot playing a triple role in Vijay Anand directed JOHNY MERA NAAM. His famous character of Pehle Ram, Dooja Ram and Teeja Ram added hilarious element to the otherwise action thriller. His performance was so much appreciated that he went on to win Filmfare Best Comedian Award.

Interestingly however what may come as a surprise to readers is that after these two comedian’s fabulous triple roles whenever Bollywood superstars have tried a triple role on silver screen, they have bombed at the box office. 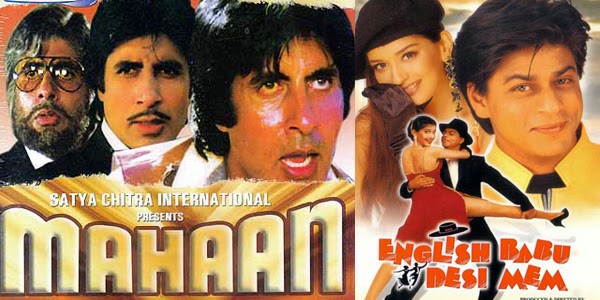 The first attempt was made by thespian Dilip Kumar in BAIRAAG and later by star of millennium Amitabh Bachchan repeated in MAHAAN!!! Both were major debacles. That’s not all even Shah Rukh Khan and Rajnikant have beaten dust when they did triple roles in ENGLISH BABU DESI MEM and JOHN JANI JANARDHAN respectively!!!

Actors who did multiple roles in Bollywood (ALL FAILED!)