(The moustache is a reflection of pride. A man who doesn't have a moustache does not have any pride).

In the upcoming films Shah Rukh Khan spots a thick moustache in RAEES and Salman Khan too spots a moustache in PREM RATAN DHAN PAYO. But in both the films the actors play a double role and Bollywood is known for differentiating twins by a moustache! 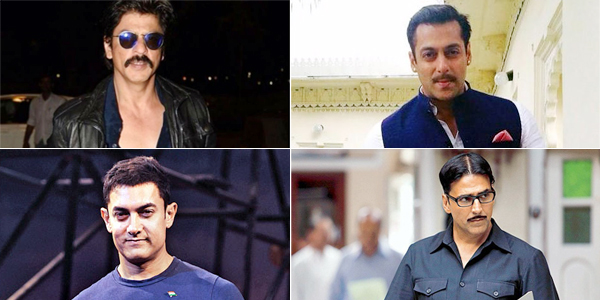 However in reality moustache in Bollywood is a big NO for the heroes, if you do not believe check out all the top stars of Bollywood from the 50’s to 2015, a majority are without moustache.

Even the trio Khan viz. Salman, Aamir and Shah Rukh Khan are without moustache.

It seems the reason why Bollywood heroes do not spot a moustache is probably because it portrays an elderly look!

If you are a Bollywood buff than you must have noted that whenever a hero is given an elderly look in films then the first thing that the director does is giving them a moustache. Remember the recent hit BADLAPUR, in which Varun Dhawan is given a moustache and beard to make him look aged. Likewise there are many films like Shah Rukh Khan in CHAK DE; Akshay Kumar in SPECIAL 26.

There have been exceptions in Bollywood who spotted a moustache and became hit like Guru Dutt, Raj Kapoor, Shatrughan Sinha, Raaj Kumar sported a moustache. Stars like Jackie Shroff and Anil Kapoor up the trend well into the 90s. But in nutshell most heroes have preferred to be clean shaven.

It is everybody’s desire to click a picture with star of millennium Amitabh Bachchan.

Hence when Badshah Khan aka Shah Rukh after his successful hit blaze of films like BAAZIGAR and DARR got the opportunity to click a picture with Amitabh Bachchan for the first time in the mid 90’s he had butterflies in his stomach.

To win over the heart of superstar Amitabh Bachchan, the budding actor also became Bachchan Sahab’s hair dresser as Shah Rukh happily held a mirror towards Big B, while Bachchan gave touches to his final look.

Sharing the rare picture on twitter SRK wrote, “My 1st ever photo shoot with the Maestro. I remember I rested my hand on his shoulder ever so lightly lest I ‘soil' him” 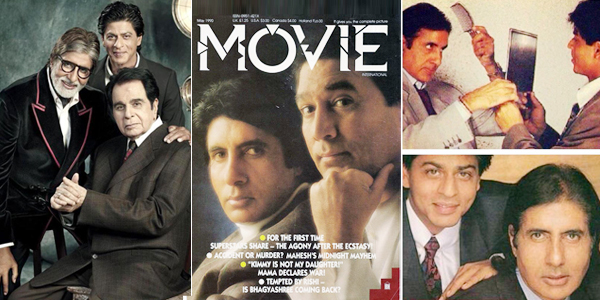 Another picture that made history was that of ‘Original’ Superstar Rajesh Khanna and his successor to the throne of Superstar Amitabh Bachchan coming together for a shot.

Renowned photographer Gautam Rajadhyaksha, who clicked the magical movement in 1991 for the Movie Magazine cover said, “The time fixed for the shot was 7 pm but Kaka (Rajesh Khanna fondly called) was known to be a late comer and Amiatbh Bachchan a punctual. Besides there existed a cold war between the two hence I doubted whether the shot would be possible but to my pleasant surprise the duo arrived for the shot hand in hand!”

Finally the third picture which shall remain embodied in golden memories is that of three generation of Superstars coming together for the cover photo of Filmfare magazine, which celebrated 100 years of Indian Cinema.

The trio of course is Dilip Kumar, Amitabh Bachchan and Shah Rukh Khan, truly a majestic movement! The shot was held at Dilip Kumar’s bungalow.