In the last issue you read how the magical trio Kishore Kumar, S.D.Burman and Dev Anand gave a boost to the playback singing career of Kishore Kumar. Though the trio established Kishore Kumar as a singer to recon but it was Kishore Kumar’s pairing with superstar Rajesh Khanna that made him the Star Singer and the duo’s lethal combination with R.D.Burman gave Indian Cinema some of the most memorable music.

When Shakti Samanta the director of ARADHANA, the movie that made struggling actor Rajesh Khanna a superstar, was finalizing the movie’s music he wished to have Mohd. Rafi sing all the song but S.D.Burman requested him to give at least one song to Kishore Kumar. Shakti Samanta agreed. Hence the song Mere Sapnon K Rani … was recorded. During the making of the movie S.D.Burman fell ill and hence one song Roop Tera Mastana….was recorded by his son R.D.Burman.

The song became such a craze that it fetched Kishore Kumar his first Filmfare award as a Playback Singer. The highpoint of this award was that Kishore Kumar beat versatile singer Manna Dey who was nominated for the heart rendering Bhajan Kal ka pahiya ghume bhaiya….(CHANDA AUR BIJLI) and yet another versatile singer Mohammad Rafi, who was nominated for the song Badi Mastani Hai meri mehbooba… ( Jeene Ki Raah).

Towards his end Kishore Kumar had expressed his desire to quit films and settle down in his native Khandwa but instead he quit world. With the sad demise of entertainer par excellence, Kishore Kumar, the Hindi Film Industry lost its limb. The hundreds of songs which he has immortalized by his melodious voice ensure that he stays in our ears and more importantly in our hearts.

So shall it be, Kishoreda.

Posted by Unknown at 4:59 PM No comments:

Madhur Bhandarkar, the prolific filmmaker and winner of three National Awards has been selected by the Maharashtra government for the prestigious Raj Kapoor Smriti Award. The press release by the Maharashtra government claims Madhur Bhandarkar has been selected for this esteemed honor for his immense contribution to Indian Cinema. The award will be conferred upon him at a glittering ceremony on Aug 12, 2014.

Maker of hard hitting social relevant movies like CHANDNI BAR, PAGE 3, TRAFFIC SIGNAl, FASHION etc; Madhur Bhandarkar thanked the state government for admiring his contribution to Indian Cinema. Expressing his gratitude to his several fans who wished him for the accolade, Madhur Bhandarkar, tweeted, “Thank you to each one of you for the congratulatory messages you sent. I accept this Maharashtra State honour bestowed on me, in all humility.” 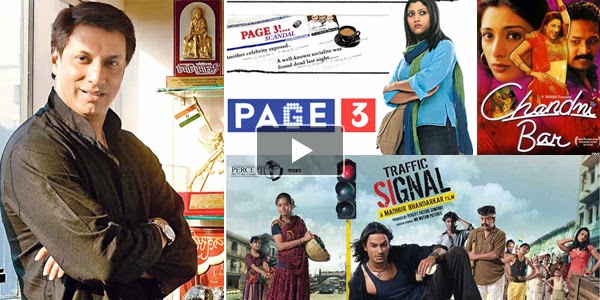 The Raj Kapoor Smriti award is a befitting for Madhur Bhandarkar because like the great showman Raj Kapoor, who dwelt with social issues in his movies like AWARA, which focused on the grave issue of orphans taking to crime, or BOOT POLISH, that focused on child labor or JAGTE RAHO and SHREE 420 that exposed the corrupt high profile citizens of society, JIS DESH MEIN GANGA BEHTI that gave a solution to the dacoit problem or PREM ROG that attacked the widow system or RAM TERI GANGA MELI that exposed the decaying political system of India and HEENA that focused on Indo Pak friendship.

Likewise Madhur Bhandarkar has dwelt with sensitive subjects in his movies like CHANDANI BAR, focusing on the evils of prostitutes, PAGE 3 exposing the media barons, TRAFFIC SIGNAL focusing on the woes of beggars of traffic signal and FASHION revealing the naked truth of fashion world.

The Raj Kapoor Smriti award is yet another feather in the already studded cap of Madhur Bhandarkar. Besides winning National awards for CHANDANI BAR, PAGE 3 , and TRAFFIC SIGNAL. Madhur Bhandarkar has won many International acclaim too.

His most successful film PAGE 3 that exposed the malpractices of media world won high acclaim at the Raindance Film Festival, London 2006 and IFFLA Los Angeles 2006.

His other hit film FASHION that revealed the naked truth of the fashion industry was also appreciated at many foreign film festivals like it was shown at the 31st Moscow International Film Festival 2009, Festival de Festivals, St.Petersburg 2009 and Norway Bollywood Festival 2009.
Posted by Unknown at 11:38 AM No comments: