More than fifty years later ageless beauty Rekha is once again reviewing the super hit song on the silver screen draped in the royal outfit and jewelers adorned by Madhubala and recreating the same nakharaas and thumkhaas displayed by Madhubala, the Venus of Indian Cinema. 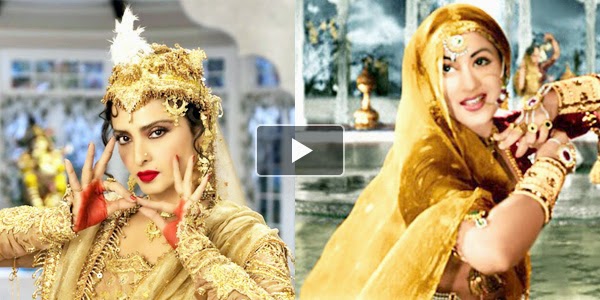 Inder Kumar, the film’s director speaking about the song said, “Actually the song is a kind of musical parody featuring several classic songs of the golden era picturised on beautiful legendary actresses of the 60’s.”

He informed, “Besides the timeless Pyaar kiya toh darna kya… we have super hit songs from GUIDE featuring Waheeda Rehman and so on.” He added, “Each song will have a single antra and Rekha will be seen draped in the same costume dancing to the same steps as accomplished by the great actresses. In nut shell it is an ode to the classic music and dance of golden era.”

Choreographed by Shabina Khan the song and dance sequence will take the audience into retro and give an insight to the younger generation about the kind of melody and traditional dance that Indian cinema once boosted.

Shabina Khan briefing the media about the song said, “ It was very difficult to cajole Rekkhaji to do the song as she was initially hesitant to portray such cult and respected figures like Madhubala, Waheeda Rehman and others on onscreen. But we expressed to her that her inimitable talent will truly justify the scene and would make the legendary actresses immortal she gave the nod.”

Super Nani is a movie that will change the traditional perspective of grandmothers in the movie. The film revolves around a grandmother who is always taken for granted by her kids and husband but her grandson Sharman Joshi helps her take charge of her life. And that's how Nani becomes Super Nani.

The movie is co-produced by Indra Kumar and Ashok Thakeria, deals with women empowerment. Featuring actors like Sharman Joshi, Shweta Kumar, Anupam Kher and Randhir Kapoor, the film will hit the screens Oct 24.

Posted by Unknown at 1:01 PM No comments: