Ilayaraja who was basically a guitarist has done so many wonders with the western music instrument and with that he has proved is wizardry in the western music form. The earliest display of Western music expertise of Raja comes in the popular Senthoora Poove song in 16 vyathinile (1977). Here goes a sneak peak of the songs in which the Isaignani has given us superlative experience with songs and interludes that have Guitar as the center point.

All the songs in this compilation not only have guitar as an instrument played through out the song as one of the instruments. These songs have guitar having a separate space either in the form interludes or at the end of the song. 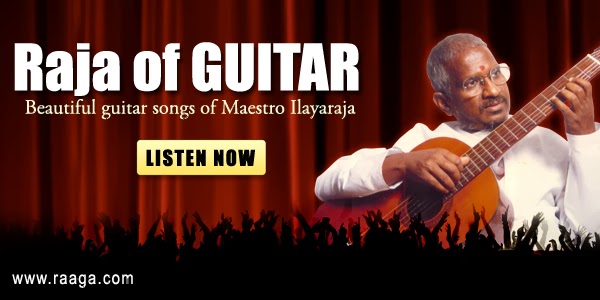 We cannot speak about the mastery of Ilayaraja’s Guitar and not include ‘Ilayanila of Payanangal’ Mudivadhillai.  While hearing the song one cannot help imagining that Ilayaraja, S.P.Balasubramaniam (the singer) and Vairamuthu (Lyricist) are competing with each other to supersede the other’s performance. Music lovers will end up deciding Raja sir has won hands down mainly because of the exemplary guitar interludes that come between the charanams and at the end of the song.

While in ‘En iniya Pon Nilave’ (Moodupani) the lead actor’s cheerful guitar playing is used to impress his lover in ‘Nalam Vaazha’) the same would have been used by the male character to soothe his girl in distress. These two songs stand testimony to Raja’s ability to convey two distinct emotions with the same instrument.

Aasai Adhigam Vechu (Marupadiyum) is one of the best examples for Raja’s brilliance in using a western instrument for folk kind of song. En Jodi Manjakuruvi (Vikram) is another song that is different altogether having Guitar at the forefront. And let’s not forget to mention Meendum Meendum Va from the same, where guitar is also used to express yearning of love.

Some most important compositions of Ilayaraja with Guitar as the main instrument have come for the films directed by his good friend Balumahendra.   We cannot complete the list without mentioning Raja Raja  Chozan (Rettaivaal Kuruvi) and the most mellifluous Nalam Vaazha (Marupadiyum)


The best way to end this would be to pay due respets to Mr.Sadhanandhan, Mr.Chandrasekar, Mr.Radha Vijayana and Mr.David Jayakumar (Father of Harris Jayaraj) for these are some of the guitarists who took part in the magic created by Raja in the 80’s.

This singer is no longer with us but her voice never failed to melt our soul. A pretty young singer who passed away due to health issues;has contributed immensely in Tamil, Telugu and Malayalam industry.

Swarnalatha 's  'Povoma oorvolam' speaks volumes about her unique pitch she possesses. Not many singers have managed to captre the essence that Swarnalatha did through her songs. Be it Illayaraja or Rahman, Swarnalatha has done her best for both the stalwarts. Some of the best songs that cannot go unnoticed that she has sung for the Maestro include - 'Aattama Therottama' from Captain Prabhakar, ''Kuyil paatu' from Chinna Maapilai, 'Maadathila kanni' from Veera and ofcourse 'Rakkama Kaiyathattu' from Thalapathi.

Moving ahead to Rahman songs by Swarnalatha, the best songs would include - 'Evano Oruvan' from Alaipayuthey. The feel that she has brought out via this song is impeccable. Even the music director himself once said that he could not think of anyone else better to have sung this song. Swarnalatha- Rahman combination has been brilliant considering she pulled off 'Akkadanga naanga' from Indian, 'Usilampatti penkutti' from Gentleman, with ease. Although her best track one could say that brought her to extremem levels of popularity was 'Mukkala muqabula laila' from Kadhalan. And in this best songs list we cannot forget adding 'Ai Rama' - a classic piece from the movie Rangeela, a very difficult song in terms of its notes structure and the pitch that it has been structured in.

Swarnalatha has also contributed in the Malayalam film industry and her best tracks include - "Pottukuthedi Pudavachoodedi" from Ravana Prabhu and "Balla Balla Ballare" from Punjabi house.

One can say, there is never a replacement for her - her versitlity, her dedication that she attaches with her profession or her emotion that she conveys through each of her songs.

Listen to Swarnalatha Songs on Raaga
Posted by Raaga.com at 12:12 PM No comments: