Entrepreneur and actress Preity Zinta posted pictures of her husband and friends in Los Angeles, after India won the T20 match which was held in Kolkata. She came up in open to celebrate the big win with the colour of Holi. She posted a collage of pictures on her Instagram page, in which she looks all smeared in Holi colours with her husband Gene and close friends. 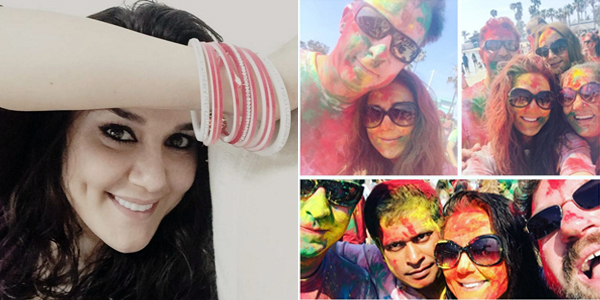 In another picture that she has posted, Preity is seen wearing 'choora', the choora is worn by Indian bride for a few days after her marriage. She captions, "The only thing new about marriage is having to wear a #Choora for a couple of days." Preity was married to Gene in a low key affair, in the presence of close family and friends. The newlywed couple seems to be enjoying every bit of their new life. Sources say that, she will soon be returning to her country along with her husband to throw a reception for her friends from the industry.
Posted by Unknown at 3:33 PM No comments: 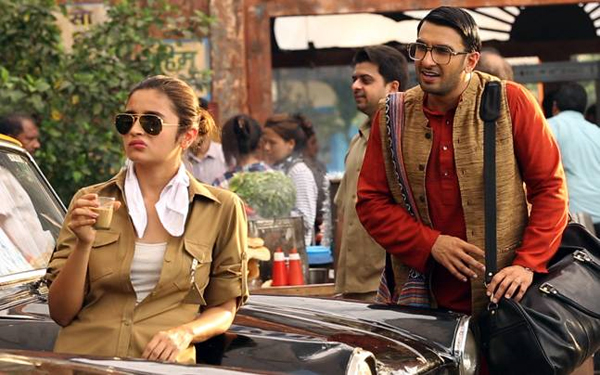 You can watch the two star in their unusual and funny avatars that got us all excited and made us go awwww. In one of the commercial, we can see Ranveer Singh dressed as a nerdy Bengali ‘Babu’ while Alia as a bindaas Taxi driver. In the other we see Alia as a sophisticated hotel receptionist who talks with a heavy lisp and Ranveer as a smart- funky customer.

Alia has very well matched Ranveer's level of energy and chemistry! They both look great onscreen together, I'm sure after watching this ad things might work out for a movie soon. Before your too late to watch them.. check out these commercials right here.

Bollywood Stars Who Gave Shocking Revelations about Their Difficulties

Stars is not always about stardom, fame and luxury...A superstar's life is not a bed of roses. Like common man, they too have their own insecurities and difficult phases. Here we have few Bollywood Superstars who have come out with shocking revelations in public only for their Fans.... 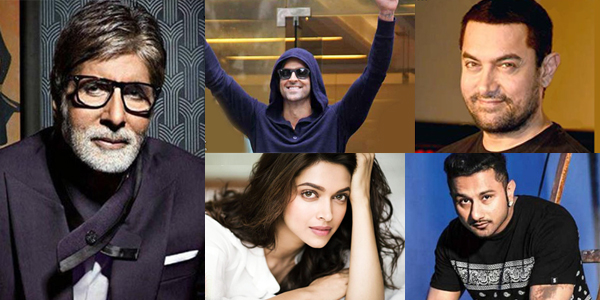 Deepika Padukone: The long legged beauty has come a long way in B-Town. Be her debut appearance in 'Om Shanti Om' or her last years blockbuster 'Bajirao Mastani', Deepika has stunned us all with her performances. However, the Diva shocked everyone, when she spoke about a phase, where she was battling Depression. Thanks to her family, loved ones and her innumerable fans, because of whom she could battle it all out and recover. Deepika came all out on this because she never wishes anyone to go through such situation. In fact,by doing this she surely set an example about how one can bounce back and rock it all over again. Deepika is currently shooting with Vin Diesel for her Hollywood debut, 'XXX'.

Amitabh Bachchan: Everyone is aware about his biggest blow of his life - the fateful moment when this megastar met with a fatal accident while shooting for 'Coolie' in 1982. Amitabh Bachchan have always referred it as his most darkest time of his life, when he close brush with death. Prayers of fans and well-wishers gave the superstar a new life, besides intensive care by doctors. Big B had even once revealed that he still suffers the side effects of that accident.

Hrithik Roshan: Following a head injury during a film's shooting, the handsome star had to undergo brain surgery. While the operation went fine, his health went downhill. Hrithik has been suffering from excruciating pain often; owing to which he was not able to sit in same position for long. Adding to his health woes was his personal stress following his separation with wife Suzanne. But then he jumped back to life full throttle in confidence. Not a person to sit and brood over things, the actor surprised all by wearing a spirited outlook. Quoted Hrithik after surgery, "Problems are always going to exist. Everything will be taken away from you except the freedom of choosing your attitude in any given environment. Once you get that right, creating results becomes effortless." He also added, "I'm going to make the best of this time given to me. Even with a hole in my brain, my spirit is intact. The surgery has reaffirmed new values. It could not tie me down."

Yo Yo Honey Singh: The musical star broke into the mainstream music scene as soon he came up with his first single. Bollywood embraced this Rockstar and so did the audience. However, he suddenly went missing in action and all sorts of speculations and rumours surrounded him. But the good news is, he’s back and is ready to take over the world again. He opened about his struggles with alcohol, bipolarity and how the last 18 months were the darkest phase of his life. Now, such a huge revelation by Rock star Yo Yo, proves that he cares for his fans and has has battled his way out of such difficult times, only to enthrall his fans.
Posted by Unknown at 12:38 PM 1 comment: