After Sanjay Leela Bhansali's upcoming film BAJIRAO MASTANI being threatened by Shiv Sena and the descendants of Peshwa and Chhatrasal dynasty, Shah Rukh Khan’s film DILWALE has received threats from a Right Wing organization to vandalize cinema halls in protest against Shah Rukh Khan’s stance on ‘Growing Intolerance in India!

According to latest reports a Right-Wing organization called Hind Rashtra Sangathan has put of posters across Indore in Madhya Pradesh poisoning the minds of the citizens against Shah Rukh Khan alleging him to be a Deshdrohi i.e. traitor.

The campaign aptly titled ‘Talkies Phodo Abhiyan’ (Vandalize Talkies Campaign) is aimed to damage cinema hall screening DILWALE featuring Shah Rukh, Kajol, Varun Dhawan and Kriti Sanon. It may be noted that DILWALE is as one of the most awaited and biggest flicks of this year. 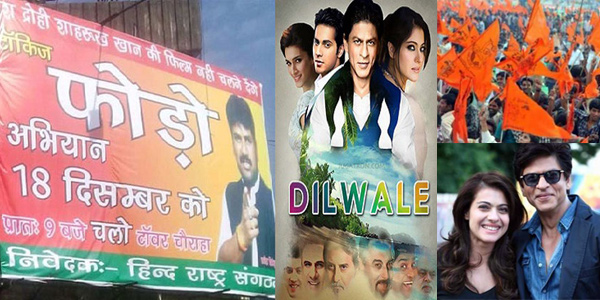 Members of Hind Rashtra Sangathan claim they are annoyed at Shah Rukh Khan’s irresponsible remark about ‘Religious intolerance’ where he said due to growing intolerance in India the nation is being pushed backward. The organization is also peeved at Shah Rukh’s support to the protest of litterateurs, who are returning their National Awards and disobeying the country.

He added. ‘We have also asked theatre-owners not to screen DILWALE but if they do not oblige to our demands than we have warned them we will vandalize cinema halls and if there is any stampede or disturbance during the screening of the movie than they would be responsible!”

Posted by Unknown at 3:43 PM No comments:

It seems the Year 2015 is surely a boon for Salman Khan! After the mega success of his two films released this year viz. BAJRANGI BHAIJAAN (earning over Rs 300 crores) to PREM RATAN DHAN PAYO (earning over Rs 200 crores) and his release in the 13 year long hit and run case 2002 from the Bombay High Court, Salman Khan continued his good fortune at the Big Star Entertainment Awards 2015 where he fetched not one but three awards! Awesome indeed!!! 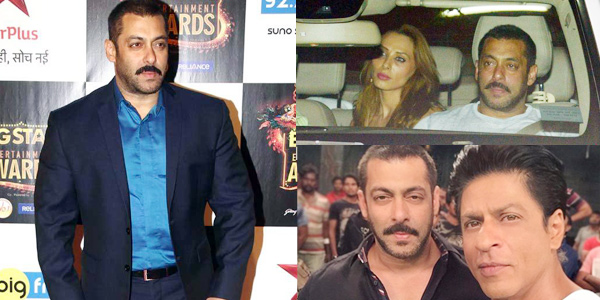 Besides name and fame the year also proved triumphant in relationship as the long time rivalry between Salman Khan and his arch rival Shah Rukh Khan ceased so much so that Shah Rukh Khan has went ahead and said that he does not feel the need to have a ‘real brother’ because he has one in close friend ‘Bhaijaan’ aka Salman Khan!

Besides if grapevines are to be believed than Salman Khan is set to marry his long time girlfriend Romanian model, Iulia Vantur early next year because if readers could recollect in the popular Rajat Sharma show 'Aap Ki Adaalat’ in 2012 Salman Khan, had said, "I will think about marrying only after the courts give their verdicts. If the verdicts go against me, I will marry only after coming out of jail."

But now the court orders are in his favor and he is a free man so Shadi toh banti hai!

Posted by Unknown at 3:34 PM No comments: