A COMBINATION BEYOND EXCELLENCE

Their combination has worked wonders right from their first movie together – Roja. If one has the power of visualizing beautiful concepts, the other has the magic of adding life through brilliant music. Wondering what we are talking about?  If you thought of A.R.Rahman and Mani Ratnam, you are absolutely right. 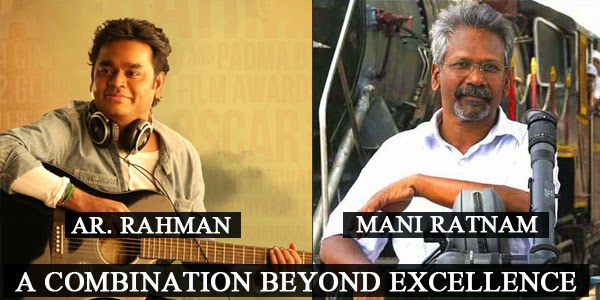 The foundation of understanding was established right at the inception of their coming together thus helping in making sure every movie of theirs together in terms of the music was a hit for sure! Thiruda Thiruda which released in 1993, following Roja needs no introduction. The quality of the background score speaks for itself. Their hatrick hit was with Bombay that released in 1995. The reason for such brilliant outcomes can be that each of the genius inspires the other to go a step further and come up with astounding results.

After the hatrick, there is more to it. The next hatrick we could say was the release of Iruvar, Dil Se and Alaipayuthey. Strong story lines with the apt use of music, there was another feather in the cap in the Indian film industry. The bond between this director and music director ofcourse has volumes to speak.There is not a single film with the duo coming together where we could say we were disappointed in terms of music. Every other movie was a hit. Moreover it is essential to also remember that ManiRatnam infact has released most of his movies in the Hindi language too apart from Tamil, and such is the dedication of Rahman for redoing the tracks in the different language too.

Kannathil Muthammital, Azhutha Ezhuthu are other wonderful hits of the duo. Last year, the movie ‘Kadal’ was released. Although not well accepted in terms of the story, the song tracks made its way to success. What have the duo lined up for us next?
Posted by Raaga.com at 5:25 PM No comments:

The recent Sangita Kalanidi Awardee, this carnatic musician is beyond amazing. Her flow in carnatic music can be compared to a river! Such is the placement of her notes – easy flowing and along the course of the rules of the carnatic music. She was bestowed with Padma Shri in 2004 itself.

SudhaRaghunathan has done various stints in the field of carnatic music. She has over a 2000 cd’s/cassettes that have been released under various labels. Sudha’s talent in music was what won her a scholarship to get tutelage under the ace musician Dr.M.L..Vasanthakumari. One pride associated with Sudha that all of us are well aware of is her way of singing the beautiful song ‘Vande Mataram’.Infact she was called to sing the song at the Parliament on its 50 years of completion. 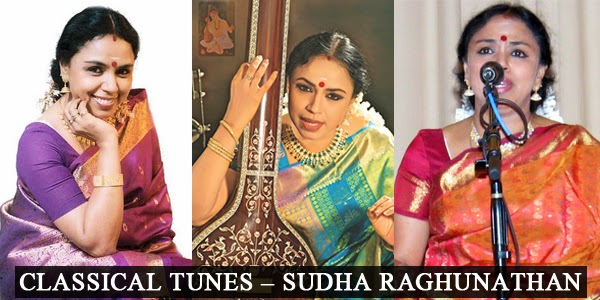 This Kalaimamani Awardee is also brilliant with her academics. A Master in Economics, she graduated from our very own Ethiraj College in Chennai. Sudha is also one of the most wonderful person who loves to delve into social service and this has made her the Managing Trustee of the ‘Samudhaaya Foundation’.

A versatile singer by nature she has also stepped into the ocean of playback music industry. Her ‘Annul Malae’ was a huge hit amongst the tamil audience from the movie ‘Vaaranam Aayiram’. Another beautiful song to her credit is the theme song from the movie ‘Thavamaai Thavamirundhu’. Sudha Raghunathan has also sung the song ‘Kadhal Periyatha kamam’ from the movie ‘Sattham Podathey’. Although just a handful of songs in the playback industry, she has made a mark here too.

Sudha is also vouched for coming up with innovative concepts in presenting her carnatic rendtitions and also for her partnerships with other stalwarts in exploring the the various nuances of carnatic music as a whole and thus keeping the rich tradition alive.
Posted by Raaga.com at 4:56 PM No comments: