The 50’s and 60’s witnessed legendary filmmakers like Bimal Roy, Mehboob Khan, Guru Dutt and Raj Kapoor, who had the amazing potential to infuse art and commercial elements in the making of a movie thus making potboilers like MADHUMATI, MOTHER INDIA, PYASA, AWAARA etc.

Decades later Rajkumar Hirani better recognized as Raju Hirani has attained the same credentials as the above mentioned legends. His movies have the same ingredients that keep people in splits straight till the end with just the right amount of emotions. November 22, marks the birthday of Raju Hirani , who is making waves these days thanks to his upcoming movie PK. Raaga.Com wishes Raju Hirani happy returns of the day and pray he continues to entertain with quality cinema. 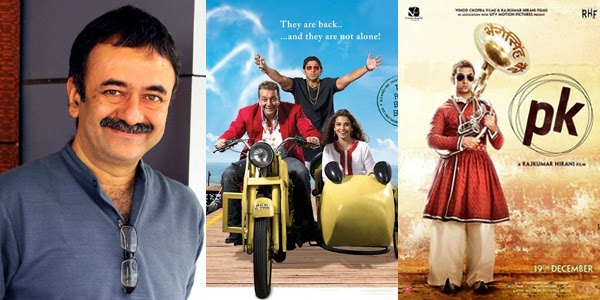 Readers would be surprised to know Raju Hirani is perhaps the only film director in Bollywood who has the prestige of giving a hat trick of successful films viz. MUNNA BHAI MBBS (2003), LAGE RAHO MUNNABHAI (2006) AND 3 IDIOTS (2009). Even the legendary Bimay Roy could not achieve this feat. His first two films PARINEETA (1953) AND DO BIGHA ZAMIN (1953) were super hits but his third film NAUKARI (1954) was a dud at box office.

With PK Raju Hirani’s credentials are at stake because if he hits the bull’s eye yet again at the box office with PK then he will prove why he is called- The director with golden touch!

On being quizzed 3 IDIOTS did 200 crore business will PK break the record. Raju says, “ For me a movie makes Rs 100 crore or Rs 200 crore is a number, nothing more. Yes, a movie should do well business-wise, as, after all, it is an industry but not at the cost of good content.” He adds, “ For me a good content is more important than money. It’s sad a movie’s success is judged only by the money it makes.”

Hirani, who shares a warm relation with Sanjay Dutt on being asked about the biopic on Sanjay Dutt said, “The movie is only one tenth of Dutt's life which the world knows. In the same breath he also added that, despite everything he has gone through, there is an honest child inside Sanjay Dutt.”
Posted by Unknown at 11:16 PM No comments:

Aamir Khan with his array of super hit films like 3 IDIOTS, DHOOM 3, LAGAAN etc has not only fans in India but has fans around the globe. However any guesses whom does Aamir Khan adores?


Well the secret was recently revealed when Mr. Perfectionist aka Aamir Khan was left awestruck when he met Hollywood’s superstar and Mr. Universe Arnold Schwarzenegger at summit in New Delhi. 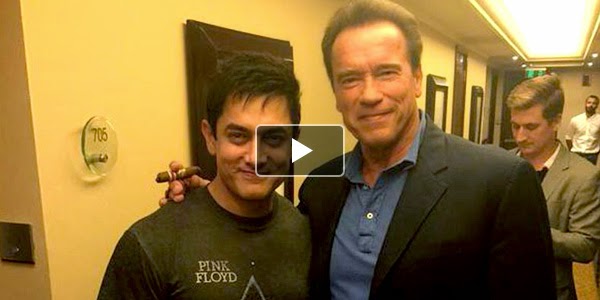 According to reports Schwarzenegger is in India for a Summit. Incidentally, Bollywood star Aamir Khan was also attending the same summit. And the two happened to meet each other. Elated at meeting Schwarzenegger, in person, Aamir was so excited that he tweeted, ““It was a bizzare feeling! I looked up when the door opened and I see THE TERMINATOR walking into my room!.”

Aamir Khan in his tweet revealed that he was in New Delhi for HT Summit but when he came to know that Arnold Schwarzenegger is also present for the summit he requested the HT officials to give him a chance to meet him.

Tweets Aamir, “I told the HT staff I wish I could meet Arnold Schwarzenegger. So they told him. And he just walked in to my room!!!”

After Bharat Ratna Lata Mangeshkar, star of millennium Amitabh Bachchan became the second recipient to receive the prestigious 2nd Yash Chopra memorial award. Dedicated to the memory of the late producer-director, the Yash Chopra Memorial Award has been instituted by the TSR Foundation of T. Subbarami Reddy.

Announcing the award an elated T. Subbarami Reddy briefing the media said, “The award is given to deserving and prominent figures from the Indian cinema for their outstanding contributions in diverse fields. This year the jury members unanimously decided Amitabh Bachchan as he definitely deserves the award.” 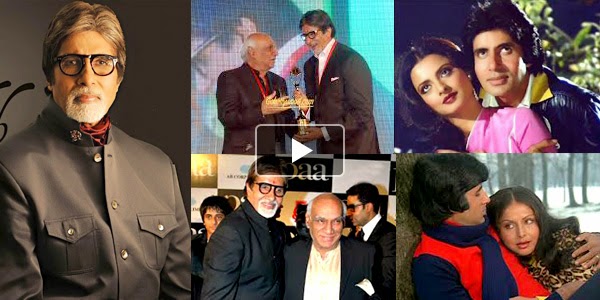 SimiGarewal, the eminent Bollywood actress and member of jury candidly confessed, “As a jury, when we were thinking about Amitabh Bachchan for this award, we didn't even have to catch a breath. Everyone was unanimous of the fact that he is deserved it."

Amitabh Bachchan will be conferred the award in December this year, the date hasn't been decided yet. The award consists of a gold medal and prize money Rs. 10 lakhs.

The award is quite apt for Big B because Amitabh Bachchan besides having dedicated his entire life to Indian film industry shared a warm relation with Yash Chopra. It was with Yash Chopra, who gave Bachchan some of his most memorable hits like DEEWAAR (1975), KABHI KABHIE (1976), TRISHUL (1978), KAALA PATTHAR (1979), SILSILA (1981).

In fact it was Yash Chopra who dared to change Amitabh Bachchan’s angry man image into a romantic poet in KABHI KABHIE and SILSILA.

Further when Amitabh Bachchan was in financial crises after the failure of his home production ABCL (Amitabh Bachchan Corporation Ltd) it was once again Yash Chopra, who gave a new lease of life to Amitabh Bachchan with his hit film MOHABBATEIN (2000) and opened doors of stardom yet again!
Posted by Unknown at 2:00 AM No comments: