Briefing the media after receiving the coveted award Dhanush agreed that there is a dearth of good movies for the children and he promised to focus on producing more films based on children. He said, “There is no doubt that there are very films that cater to children hence I will have decided to make more children films.”

KAAKA MUTTAI is a simple yet poignant and absorbing tale of two unfortunate brothers dreaming to eat a pizza. The film is written, directed and filmed by M. Manikandan and co-produced by Dhanush, filmmaker Vetrimaaran and Fox Star Studios. 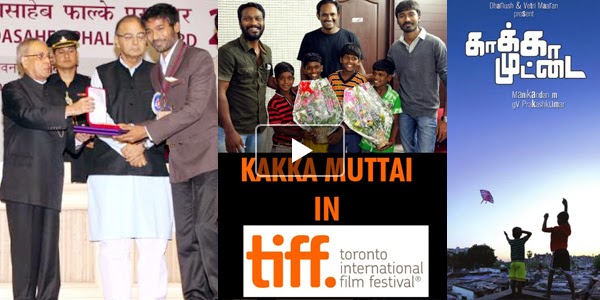 Dhanush going memory down lane informed, “When M. Manikandan brought the script of KAAKA MUTTAI to me and requested me to produce the film, I was overwhelmed by the emotional tale of two deprived brothers who live in slums and constantly demand their mother and grandmother about toys, games, TV and Pizza, like other fortunate children. The touching story just made me think about millions of such ill-fated kids in India and I nodded.”

The movie not only won Best Children’s Film Award but also fetched National Film Award for Best Child Artist for both the protagonist brothers Ramesh Thilaganathan and J. Vignesh. This is perhaps the first time an award has been shared by two actors in this category.

Besides this the movie has even won rave reviews in International cinema. In fact KAAKA MUTTAI became the first film by a debut Tamil director to have its world premiere at 39th Toronto International Film Festival (TIFF) and received a standing ovation.

Posted by Unknown at 3:12 PM No comments:

The much talked about Salman Khan’s hit and run case will eventually come to its climax on May 6 when judge DW Despande would pronounces his judgment in the long drawn 13-year-old case. Will Salman Khan will be ‘Convicted’ or ‘Acquitted’ is a million dollar question as lot of money is at stake.

While the judgment is awaited with bated breath not only by Salman Khan and his family but even the Bollywood film industry is keeping its figures crossed as more than Rs 1000 crore is raiding on Salman Khan’s films in pipeline plus earnings of his stage shows, commercials and the business of the companies for which he is the brand ambassador 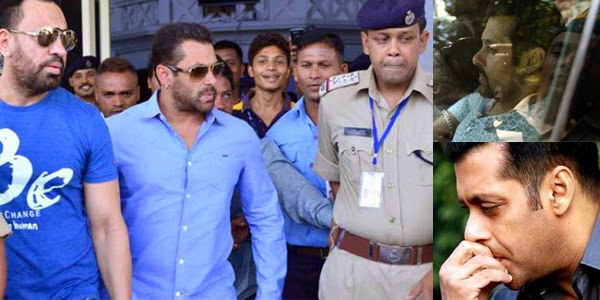 Besides Salman Khan and the film industry, readers would be surprised to know that even Mumbai’s ‘Satta Bazaar’ (Betting Market) is abuzz as bookies all over the country are exploiting the golden opportunity to the hilt. According to reports more than Rs 2000 crore have been betted from different cities of Indian that includes small cities like Chandigarh and Patna.

According to bookies Salman Khan has more chances of being convicted than being acquitted. In Mumbai the rate for conviction is 28 paise and for acquittance 80 paise per Rupee betted.

Salman Khan is facing trial since nearly 13 years in an accident case in Bandra during the early hours of September 28, 2002, which left one pavement-dweller dead and four others injured.

If convicted Salman Khan will get 10 years imprisonment but if the judge feels pity he may pronounce minimum three years jail term.

Posted by Unknown at 2:32 PM No comments: