Wasn’t our college days the best time of our lives? Didn’t we all love the freedom that was given to us? Did’nt we make the best of friendships there? Collegedays reminds everyone of the naughty times during class hours, fun times with friends, the urge to explore new things and what not? Here is a quick look back at the best ‘College’ songs that have released in Tamil movies. 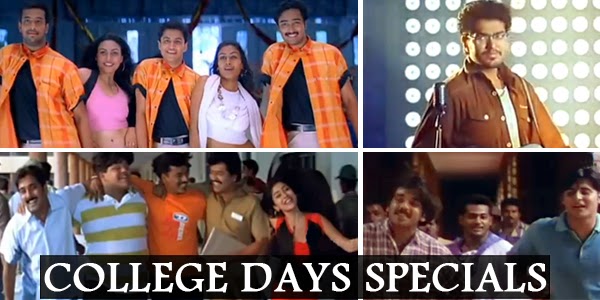 The movie ‘Five star’ typically spoke about college friendship way in a very positive way and one captivating song to go with this thought is ‘Five star Five star hurray hurray’. Another touchy song that would infact remind any girl of her college days is ‘Kaloori Malare malare’ from the movie Snehithiye. Another wonderful movie was Enakku 20 unakku 18 which showed various stages of the life of the student until marriage too. And ofcourse the song ‘Oru nanbal irrundhal’ suits the best in this context.

Ninaithaleinikkum starring prithviraj released some years back and ofcourse this movie too captures the various moods of a college student. One specific song titled ‘Nanbanai partha’ reminds anyone of their college days. Such is the impact of the lyrics of the song.

The movie ‘Nee thane en ponvasantham’ also showcases bits of the movie shot in a college period. Infact the opening of the movie begins with a college scene and the song ‘Pudikale Maamu’ which is definitely a fun song in terms of its lyrics.

No college day track list will be complete without mentioning the trademark song ‘Mustafa mustafa’. Every time weall listen to it, we all do land up crying don’t we? College memories remain etched in our hearts and the memories will never fade.
Posted by Raaga.com at 4:59 PM 1 comment:

This artist holds magic in his pen. A story writer, a lyric writer – a proud one from the Telugu Film  industry’s birthday falls today. With many movies to his credit, he stepped into the film industry in the early 1950’s. His style of writing always established a good ‘connect’ with his audience. His audience would think and absorb the kind of messages he is trying to convey through his songs. Fondly known as Acharya Atreya, this Telugu lyric writer is also bestowed with the honour of a Doctorate Degree by Dr. B.R. Ambedkar Open University of Hyderabad for his immense contribution to the Telugu literature.

A wonderful song that strikes us while talking about his wonderful contributions is the song ‘Priyathma’ from the movie Prema. ‘Swathi Muthiyam’ ofcourse was a famous one with many songs from the music album becoming famous. ‘Chinnari Ponneri’ and ‘Rama Kanavemira’ is ofcourse one of the best and the most apt ones amongst them.

Acharya Atreya did not restrict himself with writing just songs. He was infact a part of the Venkatagiri Amateurs stage group and wrote many a plays for them. His interest just did not involve writing for the movie but he also constantly kept himself well- aware of the famous historical incidents around the world. He has even written about Gautama Buddha. Culture , religion , history etc too were other subjects he focused on. Infact this man also had a strong curiosity to direct one film which he went ahead and followed. The movie was called Vagdanam and was released in the year 1961. The movie was accepted pretty well in the industry too.

The amazing writer contributed in many ways for the betterment of the Indian Film Industry. It is such an honour to have had a person of such great geniuses as a part of us.
Posted by Raaga.com at 1:40 PM No comments: