Indian government has been pressurizing UK, since long, to return the century old world renowned ‘Kohinoor’ diamond to India but in vain. However now it seems angst has crossed all limits as a group of Indian businessmen along with Bollywood stars headed by a little known actress, have decided to sue the UK government and acquire the diamond legally.

According to news reports the group of businessmen and the film stars lobby headed by Bollywood star Bhumicka Singh, who made her debut in Bollywood with eminent filmmaker Dharmesh Darshan's film AAP KI KHATIR, have hired the best of the lawyers in London and plan to soon initiate legal proceedings in London’s High Court!

The Indian group is financially backed by David de Souza, co-founder of the Indian leisure group Titos, who allege that UK during its colonization regime had looted a number of precious artifacts from India and the 105-carat Kohinoor diamond, which is worth £100 million, is one among them. 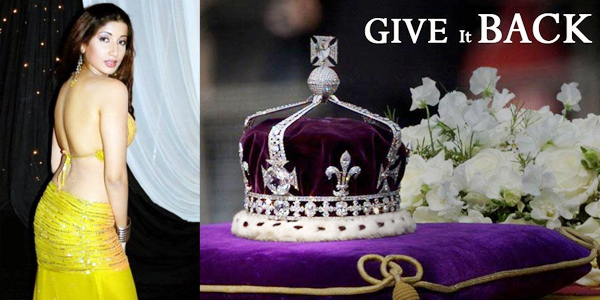 Peeved at UK government’s adamant attitude in not returning the diamond, Bollywood star Bhumicka Singh blasted, “The Kohinoor diamond is not just a priceless asset of India but it is part of India’s culture and its psyche. It should undoubtedly be returned.’

The British lawyers hired to repatriate the diamond from UK government are confident of their victory as they feel under the UK’s Holocaust (Return of Cultural Objects) Act, 2009, which confers power to return certain cultural objects on grounds relating to events occurring during the Nazi era, may help India in winning back their esteemed Kohinoor diamond.

Call it coincidence or sheer astuteness of the group, the legal battle is strategically planned during Prime Minister Narendra Modi’s visit to UK in the second week of November, where he will have a lunch at Buckingham Palace with Queen Elizabeth II.

It may be noted the Kohinoor is studded in the centerpiece of the queen’s regal crown and she is known for wearing the same during august gatherings.

Prime Minister Narendra Modi, known for his patriotism and his charismatic appeal, is being looked upon by the group of Indian businessmen and film stars to take up the issue and give a boost to the legal battle.

Whether our PM Shri Narendra Modi will take up the issue or not that only time will tell but if he does dare to speak up, then surely there is hope that India might recover our lost legacy and the Pride of India, the Kohinoor diamond, may return to India after 1851, when it was taken away by Queen Victoria.
Posted by Unknown at 5:23 PM 1 comment:

In a bid to attract maximum crowds and exploit the Diwali festival holidays to the hilt Salman Khan’s PREM RATAN DHAN PAYO's advance booking began five days in advance both at multiplexes and at single screen theaters. To reach out at maximum cine buff both Salman Khan and Sonam Kapoor took to twitter and informed the cinegoers about the advance book bonanza.

The advance booking that opened on Saturday November 7, 2015 as expected has opened to an overwhelming response. Trade pundits informed that the maximum rush to book the tickets have been reported from Kolkata. The second on the list is Mumbai followed by Delhi and Punjab.

However the movie has failed to generate a similar kind of passion down South as South superstar Ajith’s VEDHALAM is also releasing on November 10. Hence movie buffs down South have shown their preference to VEDHALAM than PREM RATAN DHAN PAYO. 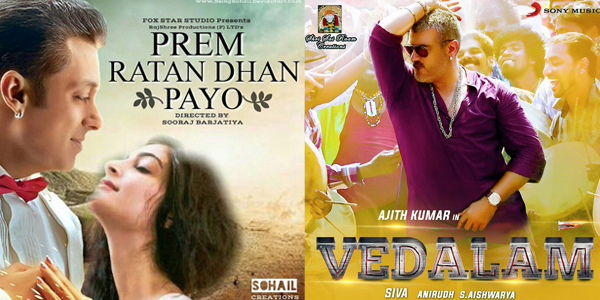 As a result in cities like Hyderabad and Chennai, PREM RATAN DHAN PAYO’s advance booking has thus shown a below average opening.

Like Salman’s PREM RATAN DHAN PAYO, Ajith’s VEDHALAM is also the most awaited film of the year.

The film is directed by Siva and produced by Aishwarya. The highlight of the film is the first time combination of Thala Ajith with the gorgeous Shruti Haasan.
Posted by Unknown at 4:45 PM No comments: