Dear readers with year 2014 coming to an end; Raaga.Com takes readers down the memory lane and remembers the important events that made a mark in Bollywood. Read on….

In our First series we take a look at the Top 10 controversies that rocked Bollywood.

The controversy that tops the list is Bollywood child star turned South heroine Shweta Basu Prasad, who was caught in an alleged prostitution racket. She underwent a hell of life after the Metropolitan Sessions Court, Nampally, Hyderabad, gave Shweta a clean chit in the infamous case. 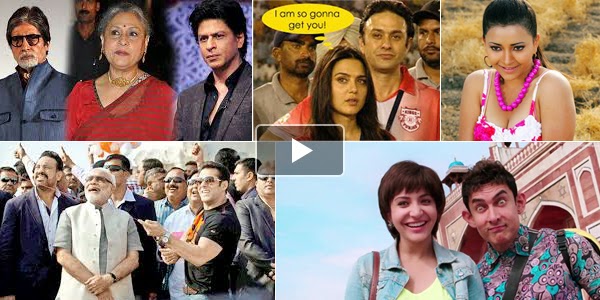 The other most sensational controversy of the year was the Bollywood actress Preity Zinta’s decry about physical abuse by her long-time beau Ness Wadia. She alleged that Ness Wadia tried to molest her during an IPL match at Wankhede Stadium in Mumbai. When she resisted his indecent approaches and raised alarm, he threatening her with dire consequences. The matter later to legal tangle.

The third position to the controversy that created a national debate in the year 2014 goes to eminent Bollywood actor Aamir Khan, who stunned the nation with his nude poster of his upcoming movie PK. The actor drew huge flaks from his fans for virtually standing naked on a railway track just covering his modesty with a stereo tape-recorded!

The controversy that occupies fourth position is about Jaya Bachchan’s bitter remark against Shah Rukh Khan’s movie HAPPY NEW YEAR. Jaya in a statement said, “HAPPY NEW YEAR is the most nonsensical film I have seen in recent years. I watched the movie only because it has his son Abhishek Bachchan!”

Later megastar Amitabh Bachchan sent a text message to Shahrukh apologizing on Jaya’s behalf and explained that her intention was not to hurt the sentiments of the film or its cast. In fact even Ash and Abhishek also went up to Shahrukh’s residence and apologized but Shah Rukh refused to attend them, instead his wife entertained them.

Bollywood hunk Salman Khan recognized for controversies comes at number five. This year he had to pay a huge prize for accepting the invitation from Narendra Modi during the kite festival in Gujarat.

Salman Khan’s fans in Gujarat, particularly Muslim, were deeply hurt by Salman’s admiration for Narendra Modi. According to reports the anger was so extreme that Salman’s movie film JAI HO was boycotted and the movie failed to garner good business.

NOTE: In next addition read Top Controversies from 6 to 10
Posted by Unknown at 9:53 PM No comments:

Rajkumar Hirani, producer Vidhu Vinod Chopra, Siddharth Roy Kapur, and superstar Aamir Khan are on sky nine because their most anticipated movie PK has lived up to the expectations of the cinegoers and the movie is creating new box office history.

From hardcore film critics to the cine buff the movie has been widely applauded particularly, for its brilliant subjects, which exposes the fallacy of multiple religions with panache.

However when everything was going so smooth the film has landed in trouble because Prashant Patel, a cynical Hindu fundamentalist and Secretary of Hindu Legal Cell has lodged an F.I.R. against director Rajkumar Hirani, Aamir Khan, Vidhu Vinod Chopra and UTV head honcho Sidharth Roy Kapur alleging the movies ridicules the Hindu rituals and portrays Lord 'Shiva' in bad light. 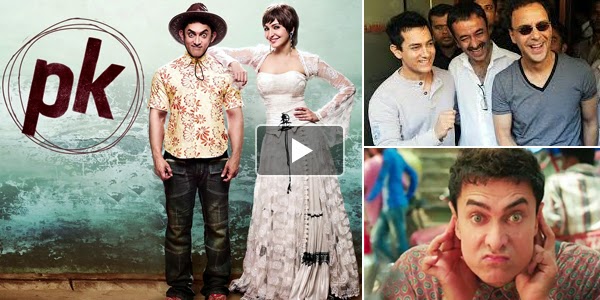 Patel has also objected to numerous dialogues which according to him are vicious and offend various faiths and religions. He raised objection particularly to the dialogue ’Jo darta vo hi mandira jaata hai‘in his complaint.

The FIR against the film is booked under section 153A, 295A of Indian Penal Code to prevent any communal disturbances in the country.

It’s true that religious sentiments in India are very fragile hence the movement somebody mocks the traditions and beliefs, Indian get easily hurt. However when the same Indians watch movies that are satirical spoof at the futility of many religious rituals and customs they take the house down with their applause. A pointer to this is the superlative success of Akshay and Paresh Rawal OMG and the recent Aamir Khan and Rajkumar Hirani’s directed movie PK.

So the question arises who are these people who raise eye brows and lodge police complaint demanding the banning of such films claiming the movies would create turmoil and disturb the nation’s secular fabric?

Nevertheless publicity, be it bad of good, is always productive and if it’s for a movies than it is boon for the film producers as it help in attracting more audience. Thus it seem producer Vidhu Vinod Chopra, Siddharth Roy Kapur , Rajkumar Hirani, Aamir Khan and party will have the last laugh!

Posted by Unknown at 5:16 AM No comments: