After Madhya Pradesh, where a Right Wing Organization Hind Rashtra Sanghatan has declared to boycott Shah Rukh Khan’s forthcoming film DILWALE, another state in India has bugled to boycott the film!

The MNS-affiliated Chitrapat Karmachari Sena on Monday began propagating people to boycott Shah Rukh Khan-starrer DILWALE by poisoning people’s mind as Shah Rukh is a merciless man, who lives life king-size but cares a damn about the pathetic plight of the poor farmers committing suicide under severe drought regions of Maharashtra. DIWALE that releases this Friday on December 18 is this year’s much awaited film as it brings together the magical chemistry of Shah Rukh Khan and Kajol. However with the date of the film nearing its release the film has suddenly found itself in unnecessary controversies.

MNS Chitrapat Karmachari Sena chief Amey Khopkar briefing media about the purposed boycott on Shah Rukh’s film DILWALE said, “Recently Shah Rukh Khan donated Rs 1 Crore for Tamil Nadu flood but in Maharashtra where he lives, he has not even donated a single penny for the farmers in Maharashtra, especially in Marathwada, who are reeling under drought.”

Taunting at SRK Amey Khopkar lambasted, “Shah Rukh Khan is living in Mumbai since many years and has minted enormous wealth from this city but it is tragic he has no emotions for the poor farmers in distress."

It may be noted just a few days back a little known Right Wing Organization Hind Rashtra Sanghatan in Indore (MP) has threatened to vandalize cinema halls if the film is shown in cinema halls in Indore.

The HRS head Rajesh Shirodkar, who also claims to be a BJP member, has organized the vandalize cinema halls campaign after being peeved at Shah Rukh’s controversial remark on intolerance.

He says, “We will not tolerate Shah Rukh Khan’s “irresponsible statements” over intolerance, which has distributed communal peace of the country. To teach him a lesson we will not let his film DILWALE release in Indore.”

The controversial Tamil song ‘Enna P*******Ku love panrom…’ popularly termed as the ‘beep song’ is the latest addition in the series of offensive lyrics that are going from worse to worst.

The song that disgraces womanhood as it demeans women’s private parts has attracted stern criticism from both film fraternity and wrath of social women cell.

The All India Democractic Women's Association (AIDWA) have even lodged a complaint with the Coimbatore police seeking strict action against singer Tamil film actor Silambarasan (Simbu) and composer Anirudh Ravichander, who became a national craze with his Dhanush song 'Kolaveri Di', for disrespecting women. 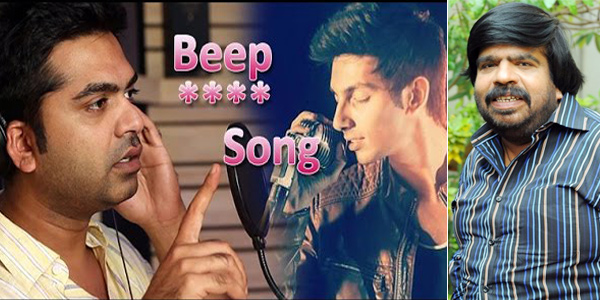 Based on the complaint the police have registered a case under Indecent Representation of Women Act, 509 IPC and 67 of Information Technology Act against the duo Simbu and Anirudh.

However in a swift change of action both Simbu and Anirudh have declined their association with the song!

Anirudh who is in Canada doing a music concert dedicated to the flood victims of Chennai in a statement has categorically disassociated himself from the song saying, “I would like to clarify my stand on the subject. It is neither my composition nor my lyrics and I am not the singer. Unfortunately to my dismay my name has been unnecessarily dragged into this controversy even though I am not in any way connected.”

Showing his reverence towards ladies he wrote, “I wish to reiterate I have the greatest regard and respect for women putting to rest all speculations on this subject."

Like Anirudh, Simbu too has taken a U-Turn stating that someone had stolen his song and released it online and thereby has invaded his privacy.

To support his son Simbu's father T Rajendar, famous filmmaker, has also filed a complaint with the Cyber Crime Cell alleging the song is a clever attempt to disgrace his son. In a press release he said, “The song has been cunningly plagiarized by someone as it is a rough composed song with dummy words without proper lyrics along with some interpolate words.”