With Sanjay Leela Bhansali’s BAJIRAO MASTANI overpowering Shah Rukh Khan’s DILWALE in every department of filmmaking from strong content to superlative performances; BAJIRAO MASTANI has began dominating DILWALE, not only the box office but even the film award nites.

A picture of this was observed on December 22 in Mumbai where at the Renault Sony Guild Awards 2015 BAJIRAO MASTANI swept maximum number of awards ranging from Best Actor - Ranveer Singh to Best Director - Sanjay Leela Bhansali. In addition, in the popular category Tanvi Azmi, who played the widow and mother of Ranveer Singh in the film, also won the well deserved Best Actress in Supporting role. 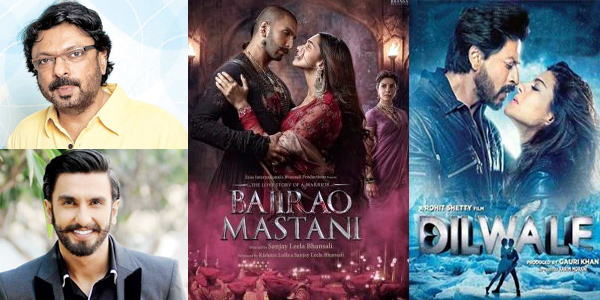 Ever since the movie has been release both Sanjay Leela Bhansali and Ranveer Singh are being praised for their commanding performances.

In fact Ranveer Singh is on sky nine as his performance of the Maratha Peshwa Bajirao has taken the nation by storm. He has literally lived the character to perfection. His dialogue delivery with the pinch of Marathi accent is commendable. The rawness during the battle scenes, the sensuality during intense love scenes and his emotions during the climax are all bewitching, placing him as an actor par excellence.

Bowled over his masterpiece performance, star of millennium Amitabh Bachchan, sent a hand-written compliment saluting the actor. In addition even director-producer Aditya Chopra was at loss of words after watching BAJIRAO MASTANI.

Posted by Unknown at 4:42 PM No comments:

DILWALE which took off to an excellent start on day one i.e. Friday by collecting Rs 21 Crore and continued its stronghold till Sunday with Rs 24 Crore finally lost its sheen on day four i.e. Monday by dropping to a mere Rs 10.09 Crore!

In contrast the dark horse Sanjay Leela Bhansali’s BAJIRAO MASTANI, which began on a slow start on Friday with Rs 12.80 Crore, soon gained momentum with word of mouth publicity on day two i.e. Saturday and collected Rs 15.52 Crore. On Sunday it eventually registered an even better show with Rs 18.45 Crore. 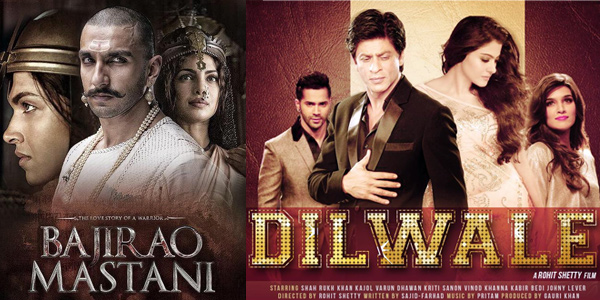 What is surprising is that on Monday, which is regarded as the ‘Acid Test’ day for any movie (because it is a working day) DILWALE nosedived to over 50 per cent, in contrast BAJIRAO MASTANI’s witnessed an upward raise of over 10 – 15 per cent. Thus while DILWALE collected Rs 10.09 crore on Monday; BAJIRAO MASTANI went ahead and fetched Rs. 10.25 cr.

Interestingly peeved at the drop in collection of his film DILWALE at the box office Mr. Shah Rukh Khan has alleged that the film has seen a decline as many of his fans have been hurt by his growing intolerance remark.

But Mr. Khan, if I am not mistaken, before the release of the film you had apologised for your comment on ABP News’ Special Show Press Conference, (though it was obviously a political stunt to promote your film!)

Now that your film has flopped why play blame- game? Why don’t you simply accept that your movie is poor on content and quality in comparison to Sanjay Leela Bhansali’s magnificent epic BAJIRAO MASTANI?