Those who have seen thespian Dilip Kumar and Madhubala’s classic love story MUGHAL-E AZAM may recall the iconic ‘Sheesh Mahal’ (Palace of Mirrors) that filmmaker K.Azif had so affectionately erected for the song Pyar Kiya To Darna Kya…

A replica of the same Sheesh Mahal has been recreated by Sooraj Barjatya in his upcoming film PREM RATAN DHAN PAYO staring Salman Khan in a double role.

Designed by century’s greatest art director Nitin Chandrakant Desai, who has the reputation of designing magnificent and imposing sets for hit movies like DEVDAS, TAJ MAHAL: A MONUMENT OF LOVE, GANDHI MY FATHER , THE LEGEND OF BHAGAT SINGH etc elated at designing the set said, “It’s a dream come true. I would like to dedicate it to the entire film industry. This dream has been possible because of Rajshri productions and I would like to thank Soorajji, Salman, Maniji and the team of PREM RATAN DHAN PAYO for making it happen.” 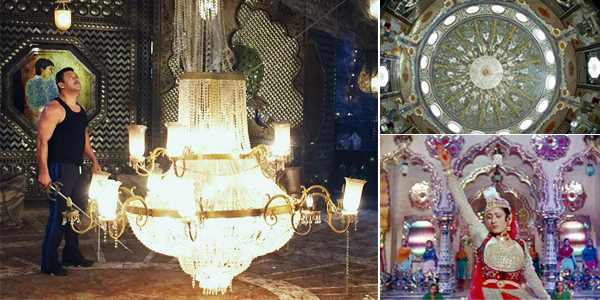 Film maker Sooraj Barjatya says that he has been inspired to recreate the Sheesh Mahal because the movie has a strong connect between the Sheesh Mahal and the film’s protagonist Salman Khan.

“MUGHAL-E-AZAM is a movie that has ignited the creative nuances of many film directors and like many I too have been mesmerized by its magnificence both as a writer and director,” confesses Sooraj Barjatya.

He adds, “Our Sheesh Mahal may not be close to the classic Sheesh Mahal that Asif sahab had erected at a whopping cost of Rs 1 million; nevertheless it is our humble tribute to the great soul called K.Asif.”