Forget the film stars even the state administration did not bothered about the victims who were cruelly smashed by Hema Malini’s driver, Ramesh Chand, who was speeding his car beyond permissible limit and banged the Alto car that killed an innocent baby and seriously injured the rest. 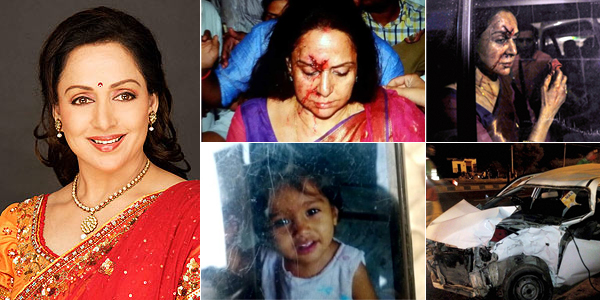 A family member of Khandelwal family travelling in the unfortunate car said, "I am surprised to declare that the nation calls itself democrat but alas two kinds of treatment prevail in the country for the victims of the same accident.”

He added, “While Hema Malini was given a VIP treatment by immediately rushing her to the Fortis Hospital in Jaipur, our family-members were sent to Sawai Man Singh Hospital, where treatment was given very late. If we had been treated equally perhaps our child would have been saved.”

Another family member lamented, “We know Hema Malini was also hurt but as a human being, at least she could have enquired about the well being of the family and being a BJP member she could have asked the doctors to give our family proper treatment.”

According to doctors Hema Malini suffered injury above one eye, her back and her legs. She underwent a minor surgery and is doing fine.

On the other hand Khandelwal along with his 30-year-old wife Shikha, 45-year-old sister in law Seema and 6-year-old son Soumil are undergoing treatment at Sawai Man Singh hospital's trauma centre.

Meanwhile as the matter gathered dust Hema Malini’s driver Ramesh Chand, was arrested on charges of over speeding and reckless driving but by evening he was a free man as he was granted bail!!!