South film industry’s most talented film maker Shanker’s upcoming movie ENDHIRAN 2 (ROBOT -2) is unarguably the most awaited film but the filmmaker is finding many hurdles in its casting.

If the latest buzz is to be believed then there are reports the South sensation superstar Chiyaan Vikram, who was signed to play the lead villain in ENDHIRAN 2 is being replaced by a top notch Bollywood actor.

A source close to the film revealed that the production house, Lyca International is not impressed by Shanker’s idea of casting a south actor as villain in the film.

The source said the production house instead is insisting Shaker on casting a marketable Bollywood actor so that the movie has a national look and is not limited to a regional status. 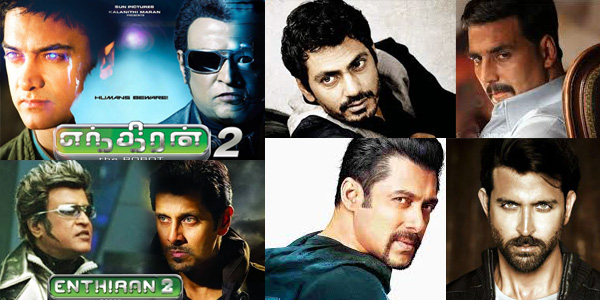 It may be remembered that the movie is being made on a mammoth budget of Rs Rs 300 crore which is more than the recent mega budget release BAAHUBALI. Hence with such a huge sum at stake the production house does not want to take any risk.

In fact, initially even Shanker aspired to cast a top notch Bollywood actor opposite Rajiniknath and create a casting coup. Hence he had approached Bollywood heart throb Aamir Khan but Mr. Perfectionist aka Aamir Khan declined the offer reasoning date issues. Left with no alternative Shanker cajoled Chiyaan Vikram, to play the antagonist, who took time to think and later nodded.

With Aamir Khan out and now even Chiyaan Vikram dropped from the project, which actor from Bollywood do the readers feel can match up to the histrionics of Rajinikant and play the lead villain in the movie.

–Is it Salman Khan, Hrithik Roshan, Akshay Kumar or the latest Bollywood sensation Nawazuddin Siddiqui, who is making waves thanks to his success in Salman Khan films KICK and BAJRANI BHAIJAAN.

Interestingly he is also playing lead villain in Shah Rukh Khan’s RAEES?
Posted by Unknown at 4:24 AM