After Hrithik Roshan, Amitabh Bachchan to be superhero!

After Hrithik Roshan dazzling the Indian screen with his superhero role in KRRISH 3, Superstar Amitabh Bachchan at the ripe age of 72 is roped into play a superhero by Disney TV Channel!

According to Siddharth Roy Kapur, Managing Director, Disney India informed that the channel has planned an animated film ASTRA FORCE, a fast paced action-adventure series and have borrowed Amitabh Bachchan’s looks and his golden voice to the animated Superhero called ‘Astra’.”

He added, “We are lucky Bachchan sir has nodded and was present at the launch of the 52-episode animated series ASTRA FORCE, in Mumbai, India on June 15, 2015. 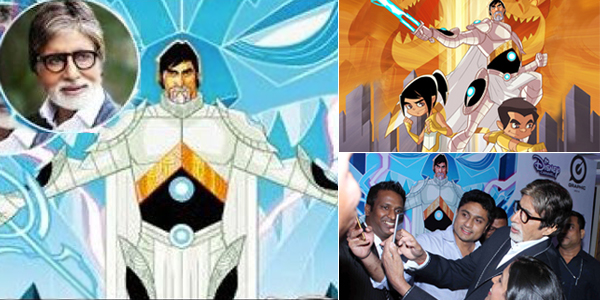 Speaking on why the channel focused on the elderly Amitabh Bachchan, instead of young actors like Salman Khan, Sharad Devarajan, Graphic India’s Co-Founder and CEO, candidly confessed, “Amitabh Bachchan is a real life superhero to millions including myself. So it’s no surprise that he is the perfect person to become immortalized in this new animated avatar.”

“Besides our superhero Astra is an elderly person. Hence we have given the character a similar beard as Big B’s real avatar. His specialty is that he has superpowers,” he informed.

Briefing about his superhero character Amitabh Bachchan said, “Astra Force will be ‘children-friendly’. It tells the story of a mythical hero from a distant world, who was stranded on Earth millions of years ago after an epic space battle.”

He added, “When eight-year-old brother and sister twins accidentally awaken the mythical superhero from his long hibernation, they teach him about modern world and join Astra to save the universe from a new wave of giant monsters and intergalactic threats.”