Karan Johar joins the list of menacing villains of Bollywood!

Kudos to director Anurag Kashyap, who after giving an arresting looks for its lead actors Ranbir Kapoor and Anushka Sharma in the movie, has yet again stunned the viewers by giving an equaling captivating look to Karan Johar! 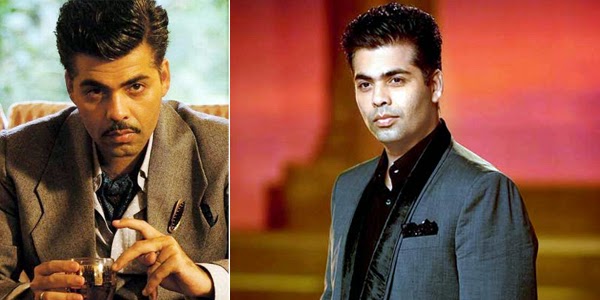 What makes Karan Johar’s appearance appealing is that Anurag Kashyap has given a complete alteration to the usually witty and charming looking Karan Johar into a somber, middle aged don, sporting a moustache!

Full marks to KJo’s mannerisms in the first look as he looks scary to say the least and it seems he is set to register his mark as one of the most iconic Bollywood villains!

Readers may be aware that Karan Johar made his first appearance as an actor in Adiya Chopra’s DILWALE DULHANIA LE JAYENGE (1995) in which he was actually an assistant director but did a brief cameo as the junior actor suppose to do the role failed to turn up at the right time of shooting. Hence Karan did the role as a compulsion. Since then he has done many small cameo appearances playing himself in films like OM SHANTI OM (2007), FASHION (2008), and LUCK BY CHANCE (2009). However BOMBAY VELVET is his First full fletched performance about which Anurag Kashyap is quite excited.

"I throughly enjoyed working with Karan Johar and he will surprise you all when you will see him in the film. A director actually is a very good actor and only a director can understand that," Anurag quipped.