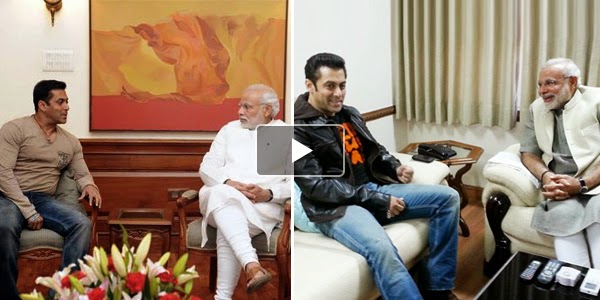 Though the twitter did not spill the beans about the reason behind the meeting but grapevine has it that the actor had given a personnel visit to the PM not for any influence to shut off his pending cases in the court of law but to invite the honorable Prime Minster to grace the wedding ceremony of his sister Arpita Khan which is scheduled on November 18 at the Royal Falaknuma Palace in Hyderabad.

It may be noted that 'Dabbang' Khan and PM Narendra Modi share a warm relation. Salman Khan may be a favorite of film buffs but he is also the favorite of honorable PM. A picture of their friendship could be seen from the fact that when Narendra Modi was contesting for the Lok Sabha election he had invited Salman Khan for a kite festival in Ahmedabad and on another important occasion both Salman Khan and his father, Salim Khan were invited to the swearing in ceremony of the Prime Minister. Narendra Modi had also called on the star when he launched the 'Swachh Bharat Abhiyan'. Thus Salman Khan is confident that Narendra Modi will accept his invitation and grace the wedding ceremony.