Today when six packs abs have become synonymous with a Bollywood hero, the action king Ajay Devgan has made a contrary statement that has created a flutter in Bollywood.

According to reports Ajay Devgan, who will be seen playing an action avatar in Prabhu Deva’s ACTION JACTION, candidly confessed, “I believe six-pack and eight-pack abs make you weak. They look nice, but they can make you physically weak. I believe you should be muscular and fit. I don’t want to promote eight-pack abs.”

The frank confession of Ajay Devgan against the mad rush among the Bollywood actors for six to eight pack abs is actually a clarion call about the hazards in store for today’s’ actors, who mindlessly keep working out in the gym. 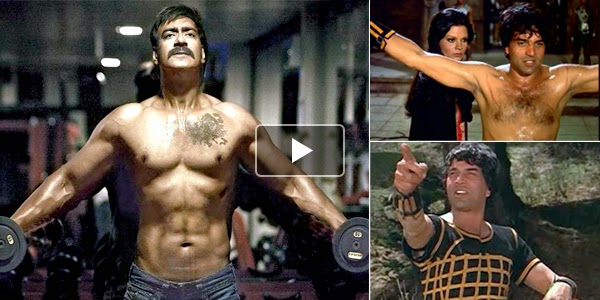 Mocking the six packs of the recent actor, the ‘Original He Man’ of Bollywood Dharmendra says, “Now-a-days everyone is a He-Man ... look at our heroes now ... they have reached almost nine-packs these days. But if you have seen my movie DHARAM-VEER (1977), you will know that I was not into making packs but pegs!.”

Readers who have seen Dharmendra in DHARM VEER will agree that he really had a steal body, which will shame the so-called today’s six pack Bollywood actors. Dharmendra, who is still fit and healthy says, “My only principal for good health had been regular ‘physical’ exercise and not the one developed in hi-tech gym. Secondly I eat good diet and a maintained a strict fitness regime. ”

Speaking about the ill effects of Six Packs health experts say, “While developing the six packs we kill the important fat from our body. As a result of low fat a person can develop multiple health issues like fatigue, low bone density, and more. Just like too much body fat can cause health problems, too little can cause similar issues.”

“In addition there’s a risk of spinal problems,” informs a doctor. He says, “ If you pay too much attention to your abs and not enough to your lower back, the abs muscles can tilt your spine forward. You’ll not only have poor posture, but you can end up creating a very rigid spinal column that is more likely to be injured. What’s worse a person can also develop breathing problems because tight abs can pull your body forward, and this can reduce the amount of space available for your internal organs - particularly your lungs.