With election buzz all around Raaga.Com traces Top 5 Bollywood movies with political backdrop.

Leader: This Dilip Kumar starer is perhaps Bollywood’s cinema’s first movie with political overtones. And what’s interesting is that the ‘novel’ script was not penned by a professional story writer but it was conceived and written by Dilip Kumar himself. Based on the theme of a socially active ‘law’ student who exposes corrupt leaders in his newspaper, the story takes twist when the corrupt political leader ‘trap’ the innocent hero into the murder of nation’s populist leader. The movie was lavishly mounted with advance technologies like Technicolor and cinemascope. Since the story was far ahead of its time the movie was not a big success. 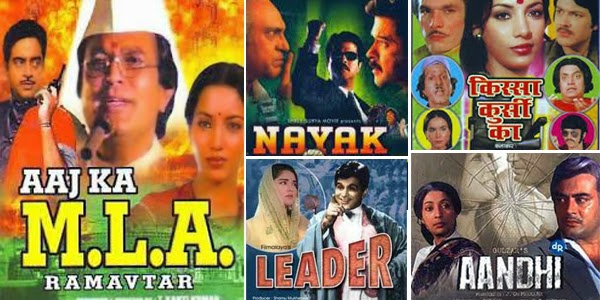 Aandhi: This is hindi cinema’s most successful movie with political background. Made during the emergency film maker Gulzar potrayed the story of an ambitious women out to make it big in the field of politics. To make the character more realistic Gulzar framed the character of its heroine on the lines of Mrs. Indira Gandhi. Readers may be shocked to known when the movie was in its 24th week in Mumbai some loyalist of Mrs. Gandhi banned the movie alleging it potrayed their Congress President in bad light, thus everting the movie from the honour of celebrating Silver Jubilee

Kissa Kursi ka: Never in the history of Indian cinema a movie generated the kind of controversy that this ‘B’ grade non-star cast movie did. Released in 1976 the movie was immediately banned by angry politicians criticizing the movie to present nation’s political leader in bad taste. Reader won’t believe for several years the movie was a hot topic of debate in parliament session gaining nation wide media coverage. However despite such immense publicity when the movie was finally censored after several ‘cuts’ and re released the movie proved a dude at box office. The interesting point of the movie was director’s daring to depict the naked reality of Indian politics how in India even an orthodox, uneducated village bumpkin can rise upto the post of chief minister.

Aaj ka MLA Ramavtar: It’s rumoured south director Dasari Narayan Rao made its original south version in just 13 day and released on the election eve thus getting maximum advantage at box office. The movie depicted a man’s lure for power and to gain it how much corruption and wrong means he has to adopt. It showed a barber (Rajesh Khanna) joining politics and with wrong means rises to the post of chief minister. To get this role from Dilip Kumar to Amitabh Bachchan to Jeetendra all were in race and when they didn’t Amitabh Bachchan played the similar character in ‘Inqulaab’ and Jeetendra in ‘Yeah Desh’ However all the three movie proved dump squib at box – office

Nayak - The real hero: This Anil Kapoor starrer had an all – new script. It depicted a common man ruling the state for one day and trying to outburst corruption, red-tappism and all illegal activities. The movie had Anil Kapoor playing T.V. journalist who interviews the state chief minister and on question to why the C.M. is unable to tackle corruption the C.M. challenges him to became C.M. for one day and eliminate all dirty elements in society. The movie had a message for the common man that honest and true patriotic citizen should enter politics only than we can have a clean government.