MS Subbulakshmi is unarguably the queen of Melody, particularly a legendary vocalist in classical Carnatic music. Her devotion in singing bhajan was so electrifying that when Mahatma Gandhi, Father of the Nation, heard M.S. Subbulakshmi sing the bhajan, 'Vaisnava janato tere kahiye, jo pir paray, jane re ' (Only those who are religious understand the sufferings of others),Mahatma Gandhi could not control his emotions and tears began to roll down his cheeks. Complimenting M.S. (as MS Subbulakshmi was fondly called) Gandhi said, ‘To sing a bhajan is one thing, but to sing it by losing oneself in god is another.'' 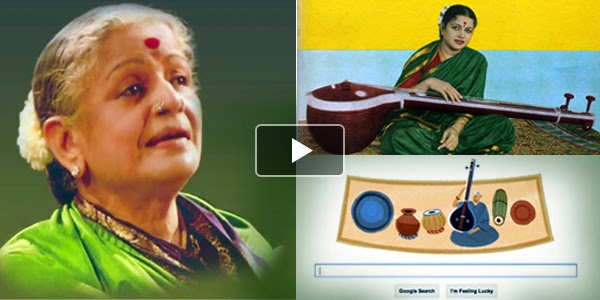 MS Subbulakshmi was born on September 16th, 1916. She was introduced to music through her mother Shanmukhavadivu. Her first guru for vocal music training was Madurai Srinivasa Iyengar. She cut her first 78-rpm disc at ten. She was also trained under Musiri Subramanya Iyer and Semmangudi Srinivasa Iyer.

She gave her first public performance in 1929 when she was just 13 at the esteemed Madras Music Academy. The performance comprised bhajans. The academy was known for its discriminating selection process. It broke its tradition by inviting a young girl as an important performer.

MS had also acted in a few Tamil films. Her first movie 'Sevasadanam' was released in 1938. With her title role of the Rajasthani saint-poetess Meera in a 1945 film she gained national distinction. In 1947, this movie was re-made in Hindi. MS Subbulakshmi also sang the famous Meera bhajans in this film. After a short foray in films, she concentrated only on concert music.

To salute her contribution in carnatic music, the Indian government conferred upon her country's highest civilian honour, the Bharat Ratna, in 1998, thus making her the First artist to receive the coveted award in the music field. Besides Bharat Ratna, MS also received the Padma Bhushan, the Magsaysay award, the Padma Vibhushan, the Spirit of Freedom award and the Indira award for National Integration Award. Her Concerts and Recordings have risen over three core rupees for charity.

Google too paid her homage on her 97th birth anniversary by posing M. S. Subbulakshmi as Google doodle in India.

Applauding her mastery in classical Carnatic music Pt. Jawaharlal Nehru said, “You are the queen, I am just Minister!”