In the last issue you read that Meena Kuamri became a star with Baiju Bawra. Now read how eminent filmmaker Kamla Amrohi came in her life and how her life from a blooming flower was withered and became a tale of melancholy and despair.

Its reported that though Meena Kumari married Kamla Amrohi much against the wishes of her father but later she repented when Amrohi ill treated her. The atrocities that Meena Kumari underwent at the hands of Kamal Amrohi were so extreme that she took to alcohol to overcome the mental trauma. In fact after abandoning Kamal Amrohi, Meena Kumari never came out from the ordeal and became an ardent alcoholic. Her pomes depict her melancholy and trauma quite apparently. She wrote … 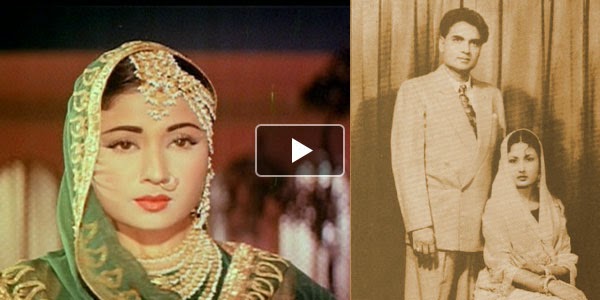 (Sorrow is my villain but my heart hunts for sorrow if there is a separation from sorrow for even a minute).

Meena Kumari poured her emotions in Guru Dutt’s movie SAHIB BIBI AUR GHULAM and deservedly won the Filmfare Best actress award. Interestingly on one hand while her reel life was going through turmoil, her real life was at the peak. In fact in 1962 besides SAHIB BIBI AUR GHULAM she gave many hits like ‘AARTI’ and ‘MAIN CHOOP RAHOONGI’ and was also nominated for best actress award by Filmfare thus becoming Bollywood’s only actress to be nominated that year in three films.

While she won loads of laurels for her emotional roles few recognized her mastery in lighter roles where she effortlessly matched with the comic of genius, Kishore Kumar, in movies like – ‘SHARARAT’ and ‘ILZAAM’. Further her performance with Dilip Kumar in ‘AZAAD’ and ‘KOHINOOR’ proved beyond doubt that the great tragedienne of Indian Cinema was equally adept in comedies too! Further with PAKEEZAH’ is become immortal in Indian cinema.

She acted in about 80 films in her 30 odd years in the industry. Paying tribute to her on her death Bunney Ruben wrote, ‘with her death, an era of Indian Cinema died, an era larger than life’