(Some say heart has broken as sweet heart has departed

But nobody tells the truth

That the Prophet of Music had departed from the world) 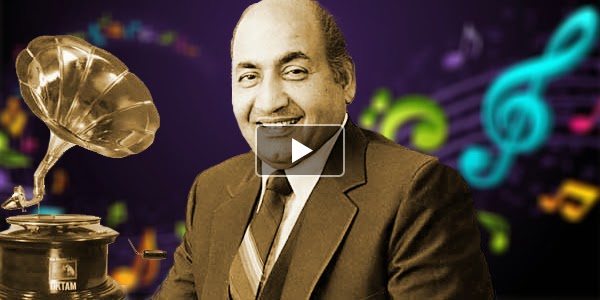 This poignant tribute was paid by legendary music director Naushad on the demise of Mohammad Rafi – The uncrowned Monarch of Indian Music!

31st July marks the 34 death anniversary of Rafi Sahab, Raaga.Com remembers the versatile singer who has swayed over the hearts of millions of music lovers for generations and continues to govern the heart of present generation too. In an amazing musical tribute to the legendary singer Raaga.Com has brilliantly penned the journey of the singer by excellently weaving some of his top hit songs from the 40 to the 80’. Read on…..

Come 31st July and the memory of Mohd. Rafi starts haunting us as on this unfortunate day, the unparallel monarch of playback singing bid fair well saying:

The entire film industry was grief stricken as it called out:

Millions of his fans too burst out:

But Rafi Sahab had to go as he said:

Today 34 years have elapsed. Physically Rafi Sahab may not be among us, but his immortal melodious voice echoes from dawn to dark reminding:

And definitely we can never forget Rafi sahab for our love for him is like his own song:

NOTE: In the next issue read about Rafi’s passion for music and his foray in Bollywood