(Oh,departed soul, if possible come back…)

Mukesh, the unparalleled Monarch of sad songs rendered this tragic number some half a decade back. Today, paradoxically, it serves well as the cry from millions of his fans spread all over the globe. Mukesh’s greatness can be judged from the fact that while his contemporaries recorded a whopping 15,000 to 20,000 songs, Mukesh in contrast recorded an infinitesimal number of just 1000 (one thousand ) songs in a career spanning over three decades and more! Yet it’s the quality of his song that his Pygmy size tally, towers large over the gigantic quantities of others!!! 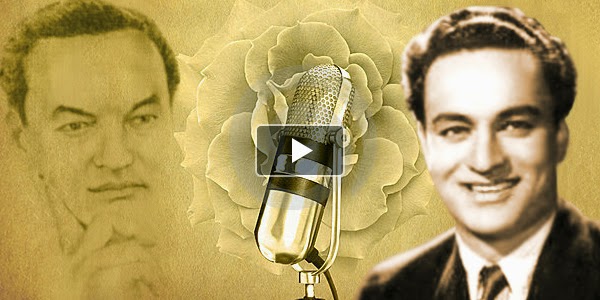 July 22 is the birth anniversary of the legendary singer Mukesh, Raaga.Com, pays him homage and remembers the great.

Born on 22nd July, 1923, as Mukeshchand Mathur, he made his entry into Mumbai from his native New Delhi in the early 40’s, on the soul strength of his uncle, Motilal, who was a big star in Bollywood.

He underwent intense training under Pandit Jagannath Prasad and imbibed the art of an exquisite blend of torment and anguish in his voice that later became his hallmark leading him to his crowning as the King of Tragedy Songs in tinsel town. Mukesh

Though the song Dil jalta hai… set the ball rolling for Mukesh few are aware, that the singer was initially reluctant to sing the same song!!!

NOTE: In the next issue read how Anil Biswas forced Mukesh to sing Dil jalta hai…