With Jilla and Veeram going to have a head on collision this Pongal, here is more about the music. The music Directors for both the films are quite famous namely Imman and DeviSri Prasad and both these music directors have always made sure they keep up the ‘racy’ feel of the movie alive. 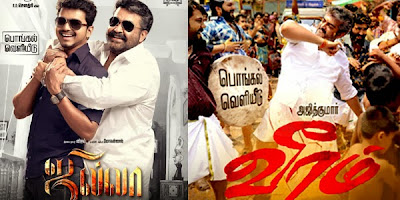 Theme songs : While Jilla’s theme has a different feel, thanks to the ‘chenda melam’ used, Ajith’s Veeram titled ‘Radhagaja’ has a gripping theme no doubt clubbed with racy lyrics which makes us visualize him in a furry mode. All we could do now is wait and watch.

Romantic numbers : ‘Kandaangi’ and ‘Ivan Dhaana’
Well it comes as no surprise that both these melody numbers has roped in Shreya Ghoshal to lend the female lead voice. Although Ivan Dhaana sounds average and is definite;y a good listen, we could feel the pulse of ‘Kandaangi’ becoming a hit considering our Ilaya thalapathy has lent his voice for this number.

‘Jingunamani’ and ‘Jinguchakaan’
There is no other reason that we could compare this two except for the beginning word – ‘Jing’ and ofcourse the non-urban touch these songs try to bring out. But we are thoroughly disappointed as both these songs do not really set our foot tapping. We can let the visuals decide which would appeal to us more.

Mass Hero Songs: ‘Pattuonnu’ and ‘Nallavanu solvaanga’
When it comes to Kollywood, don’t we all love our heroes to be ‘Mass’? Well we must say both these songs have not failed in giving out the ‘MASS’ appeal, thanks to the fast paced rhythm and the sentimental lyrics ofcourse which has helped in the emotional appeal. But when it comes to dancing for these songs, we sure do know who can score better.

‘Yeppa Maama treate’ and ‘Thangame’
Well, not really catchy for the listener but ‘thangame’ gives a better vibe of being a hit than ‘yeppamaama treate’. Also with singer Adnan Sami lending his voice for thangame, it does add a good feel to the song and makes it sound different.

Final Verdict: Overall, the songs of Jilla have a better feel when compared to Veeram.

And the countdown begins – few more days to decide which creates the magic!